The life of Queen Letizia of Spain is, in a sense, a Cinderella tale come true. Today she is a true public favorite, a role model whose life is envied and admired.

The future wife of the King of Spain, Leticia Ortiz was born September 15, 1972 in the small town of Oviedo in the most ordinary family. Her mother was a nurse, and her father and grandmother – journalists. After finishing school, the girl followed in the footsteps of the latter and chose journalism. At the end of the eighties Letizia fell in love. The man she fell in love with was Alonso Guerrero Pérez, a lecturer in literature at the University of Extremadura. They met for ten years, and then decided to get married. Surprisingly, the marriage lasted only a year. In 1999, the couple divorced. According to rumors, it was all about priorities Letizia – then she put her career above all else, and her marriage has not changed her mind. After her divorce, Ortiz redoubled her efforts. She became an anchorwoman on CNN and also worked in the Spanish division of Bloomberg TV.

Prince Felipe was one of those royal family members who have always been in the spotlight. Handsome and athletic, he knew how to draw attention to himself. Interestingly, Felipe was a member of the Spanish sailing team and it was his honor to carry his country’s flag at the opening ceremony of the Olympic Games in 1992. Surrounded by women, he nevertheless could not meet the right one. By the time he was 34, his parents, King Juan Carlos I and Sofia the Greek, were tired of looking for potential brides for their son – from ladies of noble aristocratic blood to European princesses. They tried to match the heiress to the Swedish throne and arranged “chance” meetings, but there was no chemistry. Felipe paid no attention to his age and declared that he would marry only for love – and nothing else.

“My wife will be someone whom I love, who is worthy to be the mother of my children and who agrees to share with me all my problems, difficulties and worries. And she does not have to be of royal blood,” said the heir to the throne. There were many women who fit this description: every other Spaniard was ready to become his wife. Interestingly, among the admirers of the handsome prince was not his future wife Letizia,

They met in 2002 in Galicia, where they both arrived because of a sunken tanker off the coast of Spain. Letizia was filming a report, and Prince Felipe came to get answers about what had happened.

As soon as he saw Letizia, the heir to the throne was fascinated by her, and that seems to have been the main reason why he agreed to give CNN a commentary. After a short interview, Felipe invited the journalist to dinner. Letizia politely declined. Can you imagine? The future king invites you to dinner… But the prince liked such unapproachability, and he decided not to give up. Three more refusals later, Felipe finally heard the cherished yes. And so their first date happened. The meetings were secret. This novel no one guessed. Meanwhile, the feeling between the young people was growing, and Felipe realized: he does not care about all the conventions of the fact that his beloved – a commoner, besides, divorced, he just wants to be with her.

The parents, upon learning of their son’s affair with a girl from the people, hoped that it was simply an affair. When it became clear that everything was serious, the king and queen spoke out against their son’s marriage. In response, Felipe, the sole heir, threatened to abdicate. The parents had no choice but to obey. The whole country learned that the prince was not alone on the day of the announcement of his and Letizia’s engagement – November 6, 2003. About 300 journalists and photographers walked with the bride and groom in the palace gardens for several hours. The lovers were not very talkative, and yet they shared a few details about their affair. For example, both noted that they want to have at least two, but no more than five children.

Many people then noted that Felipe and Letizia unhooked their hands only once – when they showed the audience gifts to each other in honor of the engagement. The prince gave his beloved a ring of white gold with a scattering of diamonds, and she in return gave him sapphire cufflinks. 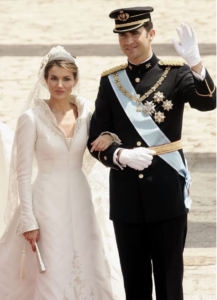 They were married on May 22, 2004 in the Cathedral of Santa Maria la Real de la Almunda. The wedding was broadcast by television stations in many different countries. A total of about 1.5 billion people around the world watched the ceremony.

About 1,400 guests attended the wedding. Letizia was particularly beautiful that day, wearing a champagne dress by Manuel Pertegaz and holding a bouquet of white lilies. The tiara studded with diamonds adorned the head of the bride and presented to her by Queen Sofia. After the wedding, Letizia received the title of Princess of Asturias. “Never in my life have I thought about anything but journalism. But you can’t explain the emotions you feel from motherhood. It has to be felt,” the princess was frank later.

In 2014, the prince’s father Juan Carlos I abdicated the throne in favor of his son. Felipe became king and Letizia became queen. Their union has only strengthened the status of the royal family in the eyes of their subjects. The couple are adored and followed with interest, and much of the credit goes to their true feelings. Today no one remembers that Letizia came from a simple family. For Spaniards she is a symbol of wisdom and beauty, a perfect example of aristocratic manners. The queen is also loved for her rebellious nature: sometimes she can allow herself liberties, which nevertheless look more amusing than cheeky in her performance. That’s why they love her.