A young man in Fort Worth, Texas, experienced something special that made him feel like he had a second chance at life: he was adopted. Eric Franklin had almost given up hope when a family took an interest in him.

The 18-year-old knew his days of finding a home were numbered. Once his next birthday passed, he would be officially out of the foster care system. Fortunately, a family opened the doors for him.

Eric said the whole experience was like a dream, and he added:

His new parents, Aaron and Eranisha, saw his story on TV, and one detail caught their attention.

The announcement showed them that there wasn’t much time left before Eric was out of the system. That’s when the couple looked at each other and made a big decision. They were already parents of four adopted children, but they couldn’t ignore the teen’s situation.

“This young man is going to be 18 years old and he’s about to get out of the foster care system. I saw his story and I told my wife, ‘Find out about this kid.'”

When they first met Eric, a friendship quickly developed. In no time, they felt like family, and the parents knew they wanted to make that relationship more permanent. The proud father said:

“We met him. We loved him from day one.” 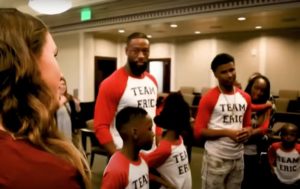 The family was ready for their day in court, and each child had a number on the back of their t-shirt. Eranisha explained that the number represented the time they joined the family.

Eric was nervous about the adoption process. It was a moment he had long awaited and dreamed about. Thankfully, his adoptive parents were by his side, as were his new siblings.

The judge was actually honored to be a part of their adoption story. He said:

“It is heartwarming and a special feeling to be able to grant the adoption.”

“This is really important. Teenagers coming out of foster care make up about 40% of the homeless population in major cities.”

“Yes, I remember Eric. It broke my heart. These people are absolute angels. I’m so glad he was lucky enough to have such an amazing [family] to take him in and love him.”

Other adoptees also shared their stories.

Eric was thrilled with his adoption. His life has changed forever, and thanks to the Franklin family, he has people who will be there for him no matter what. His story also gives hope to the many others who are still waiting for their adoptive families.