The man lived in an apartment hidden in the middle of a mall. For years no one noticed him until he was discovered one day by security guards.

Michael Townsend moved in when he was evicted from his old property because the owner had decided to develop it and he had nowhere else to go.

While he was deciding what to do, he heard an advertisement for the center and remembered seeing an empty room in the building once, so he decided to settle in. The situation got a little out of hand, and soon the 750-square-foot apartment was furnished with a couch and a PlayStation. And Michael and his friends started living in it. 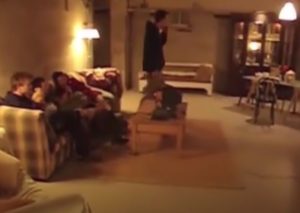 Michael, an artist, first noticed an unused space under the Providence Place Mall in Rhode Island, USA, during his daily jog.

Four years later, Townsend’s own apartment building in the historic district was threatened by developers.

And amid mass protests that lasted two years, the artist and several others were eventually forced to give way to a supermarket parking lot.

But Townsend and his friends decided that the battle was far from over, and hatched a plan to secretly live in the mall as retaliation.

On his Web site, he said:

«During the 2003 and 2004 Christmas season, Providence Place Mall radio ads featured an enthusiastic female voice talking about how great it would be if you (we) could live in the mall. The central theme of the ad was that the mall not only provided a rich shopping experience, but also had everything you needed to survive and live a healthy lifestyle.» Townsend visited the room again, which he had noticed back in 1999, and found that it remained unused, so he decided to see if he and his friends could really live in the mall.

Townsend and his buddies built a wall of sealed blocks and a back door to conceal it. They lived there for four years before the plan began to collapse. Before he was caught, Townsend planned to install a wood floor, a second bedroom, and a kitchen. Eventually, security guards found the secret property. One day, the artists, who had sworn not to speak about the apartment with anyone else, found their utility door kicked in and their PlayStation, art and photo album gone.

Townsend insisted that “the entire endeavour was done out of a compassion to understand the mall more and life as a shopper,” but his art project ultimately landed him a misdemeanour charge for trespassing.

In 2007, the artist avoided jail and was handed a probation deal.

«I was surprised at what he was able to accomplish,» Providence Police Maj. Stephen Campbell said at the time.

«But what he did was clearly criminal. The mall is private property.» The Providence Journal reported that only Townsend and his now ex-wife Adriana Young identified themselves as being mall dwellers.