Have any of you ever wondered what might happen to patrol officers while they are inspecting the area? Surely they never know what to expect when they approach the next car. Maybe that car is carrying a hostage, or there is an armed man sitting behind the wheel, ready to shoot at any minute. After this story, we are sure that there are real heroes patrolling the streets, there is no other way to describe them. These people sometimes get into the most terrible and unexpected situations. 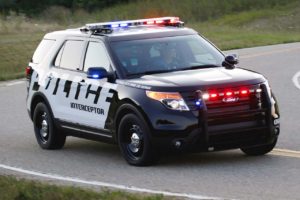 That’s what happened to Graham. He works as a patrolman in West Virginia. One day he and several others were making rounds of the area to spot drunk drivers. One car aroused particular suspicion.

What the patrolmen saw in the car alarmed them greatly. A small child was sitting in the back in his own vomit.

“I have children, too, and I wouldn’t allow a situation like that,” Graham said indignantly.

There was a woman in the driver’s seat, apparently the child’s mother. Due to alcoholic intoxication she couldn’t speak two words. They could not get the baby’s name out of her either.

A further examination showed that the baby was sick and not receiving the necessary care.

“I saw a lot of things, I didn’t think anything could surprise me. But I was struck by this attitude toward the baby,” Graham says.

The mother was being processed when Graham took the baby with him to work to be washed and soothed. The woman will answer to the law for drunken driving with an underage passenger in the back seats.

The patrolman cleaned up the baby: he washed him in the sink. The child seemed to be feeling better.

At first he cried without shutting up, afraid and nervous. But after the water treatment he calmed down and even smiled. Graham wrapped the baby in a towel and made him as comfortable as possible.

He took a short break from duty to bring the boy a teddy bear. The baby felt less lonely with the bear. 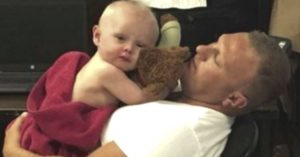 LIFE STORIES 0 6 views
Tony grew up in a simple working family. They weren’t rich, but his parents

LIFE STORIES 0 53 views
“Jessie, since you’re the new girl around here you’ll have to work table 13,”

LIFE STORIES 0 88 views
Sergio parked his car near a bank branch. It was already late afternoon, but

LIFE STORIES 0 73 views
I met Lisa at a hospital while I was working there as a nurse.