On October 5th, a man in a wheelchair helped save a drowning man at Pier 28 in Anapa Bay. The young man’s name is Nikita Vankov. Despite being confined to a wheelchair, he is a fairly well-known speaker paradiver, professional underwater swimmer, head of the foundation «Accessible Environment» and just a strong-willed, charismatic young man. 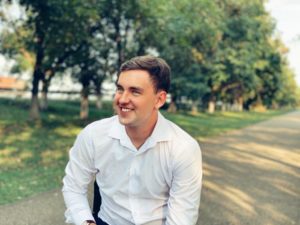 Since the age of seven he was engaged in sports swimming, he was not afraid of water or the sea at all. And on May 24, 2007, at the age of 13, Nikita and the boys were swimming near the pier. He sprinted, jumped, did not make it out and reached the bottom with his head.

Nobody noticed what happened to him and the boy had to save himself. At that moment his elbows and shoulders worked a little. That’s how he crawled on the bottom to the shore. Then Nikita was seen and pulled out. The boy closed his eyes and woke up in the intensive care unit. The doctors diagnosed him with a compression fracture of the spine in three places, one fracture, and a closed craniocerebral injury.

The athletic teenager, full of energy, became an invalid in a moment. He was recovering from scratch — developing his facial muscles, returning his speech.

The day Nikita saved a drowning man, a media group from Krasnodar came. They had won a presidential grant and were filming young people under 30 who had somehow managed to prove themselves in various situations, sports, and other areas. Nikita was chosen as the hero of the next program. On that day they filmed in various places of Anapa, the most extreme location was that very Pier 28. 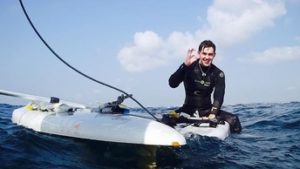 When they finished filming, Nikita turned around to leave the pier and saw a lot of people looking down. He thought it was probably a flock of fish that were mating. But if there’s a flock of fish, why is everyone watching so closely? As he approached the edge of the pier, the young man saw two guys pulling a third. He was face down in the water.

Nikita asked: «Is he drowning?» — «Yeah, help us.» Then Nikita said to the people on the pier, «Jump in, save him. Do something.» But people just looked at him and that was it.

«I started taking my clothes off. And from the dock I started directing those guys. «Roll him over on his back. Grab his chin to control his breathing. Row.» I told the other guy to help transport the drowning man to shore. They listened to me and started transporting him. Then they wanted to bring the drowning man to the pier. Some man reached out his hand to pull him out, but he didn’t make it. He fell back into the water.
But I had already gone down, swam up, first grabbed him from behind, then ducked under him, held my breath so that the drowning man came to the surface and breathed a little, then began to transport him to the shore. Saw a boat in the distance, started beating on the surface of the water with a straight hand, it was a «help» sign. And shouted: «Help, help, help.» People on the pier also began to shout after me. Either everyone was shy before, or they were afraid, confused…». 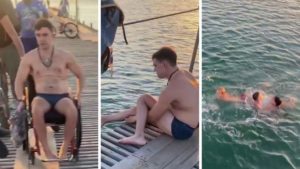 Even when the drowned man was pulled onto the boat, Nikita kept control of the situation, because the boy’s life was still in danger.

He was brought ashore and treated by paramedics. Everything ended safely, everyone is alive and well.