Since the fall, Mary Delima had seen a dog wandering near her home in Kentucky. But she couldn’t get close to it. Only in January did she get to see it up close. It was very cold that day, and the border collie decided to sit outside her house.

The dog seemed to be waiting for her help. The animal was very thin and dirty. Mary fed the dog before calling the local animal control agency to find out what to do.

She was told that an ad would be posted on the service’s website and that if no one picked up the dog in 2 weeks, she could have him. Mary Delima and her family had recently lost their dog Bruno , and they didn’t mind the idea of getting another one.

The deadline passed and no one came forward. Thus, Mary Delima was able to adopt him. She named him Beau . The Border Collie was examined by a veterinarian. He was also taken to the groomer. The dog gradually returned to his normal weight, gaining almost 7 pounds. 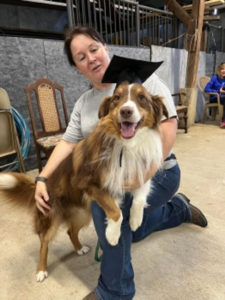 “He’s a calm dog. He doesn’t bark much,” says his new owner.

Mary runs an equestrian complex. Her 91-year-old mother, Teresa, also lives with her. Beau loves her dearly. Every morning when the woman takes her medicine, he stands beside her and waits for her to finish so he can kiss her. 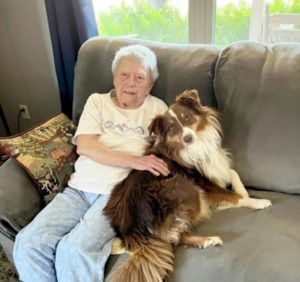 A few months after adopting Beau, Teresa had a stroke. She was returning from a walk, and as she approached the walkway leading to the house, the woman collapsed. Her daughter didn’t notice it because she was giving the kids riding lessons.

The Border Collie began running back and forth, running and barking, clearly trying to get his owner’s attention. Mary Delima was surprised by Beau’s unusual behavior. But it became clear to her when one of her students, who saw Teresa on the floor, warned her.

“Her oxygen was down to 88 and she was shaking. She was lying on the heat,” she said.

Everyone ran to Teresa to save her. First they put her in an air-conditioned car and gave her oxygen. After 20 minutes, she felt much better. Beau kept fidgeting and barking. He only relaxed and calmed down when Mary Delim’s mother was taken home and sat down in her chair. It was as if at that moment he said to himself, ‘Okay, she’s back where she belongs,'” her owner recalls.