An 11-year-old boy was not confused when a fire broke out in the house. The boy not only prevented the fire, but also saved his three-year-old brother and grandfather.

The head of the family, Mansur, still recalls the events of that winter evening with a shudder. While waiting for his wife and daughter, he lay down to rest, and was awakened by the cry of his 11-year-old grandson. There was black smoke everywhere. 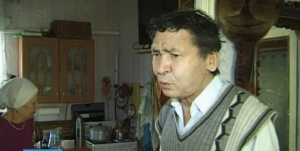 “He was waking me up – “Grandpa, Grandpa!” he was shouting. I couldn’t hear him, I was asleep. Then he pushes me – “We’re on fire, we have a fire! I run out here, and there’s nothing in sight. I think there’s not one percent chance of survival, that’s it, the end of us! The house is wooden, how can we put it out? The gas gaskets burned out, and the gas started coming out. 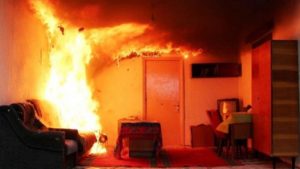 Ramis, ignoring his grandfather’s confusion, covered his face with a wet rag and began to pour water on the fire. He did not forget about his three-year-old brother, who, because of his youth and inexperience, opened the flap and let the fiery genie out of the gas boiler. The brother also needed help.

“I took my brother to the hall and gave him a wet rag, told him to put it over his mouth.

The teenager, almost alone, managed to cope with the fire.

The local fire department also found out about the brave act of the young rescuer and presented the little hero with a big award. At the school Ramis was solemnly presented with a certificate of honor and a valuable gift. 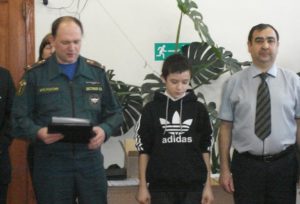 The head of the fire department said:

“Thanks to the boy’s decisive actions, a big disaster was avoided. If he had not taken these actions, but simply left the house, then the grandfather and younger brother could have died. That is, decisive action prevented a disaster. I believe that at least the boy saved the lives of two people.”

Now, when visitors come to the boy’s house, they are always told the story of how Ramis saved the family from the fire. And while his twin brother dreams of becoming a military man, Ramis seems to have made his choice in favor of an equally courageous profession.