The story that completely changed the life of a girl from Uganda began in 2009. Phiona Mutesi was about nine years old when she met Robert Katende, a missionary and trainer who worked for the US Charity Sports Outreach Institute. Phiona was wandering the streets of Katwe, one of the poorest neighborhoods in Uganda’s capital city, dirty and hungry. When Robert saw her, he offered the girl a bowl of gruel in exchange for a chess lesson. From that moment on Phiona began to walk the 6.5 kilometers every day from her home to the church in Katende, where the missionary fed the children and taught them to play chess. 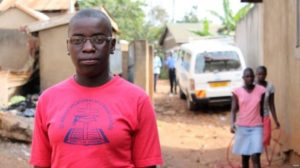 As the girl recalls, initially they had only seven chess boards at their disposal, and the missing pieces were replaced with items found among the garbage. Robert Katende quickly discerned the girl’s talent and began to give her much more time. After only a year of lessons, the young chess player was easily beating all the boys and even her coach. 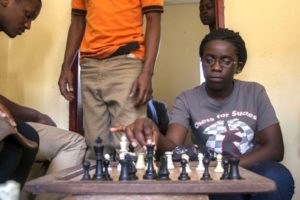 When Phiona was 11 years old, she competed in her country’s junior championships and won first place. This was also the case for the next two years. At the age of 15, Phiona left Uganda for the first time to participate in the Chess Olympiad in Khanty-Mansiysk, Russia in 2010. She was the only player who did not attend school. The girl spent part of her £130 winnings on various fees and wanted to give the rest to her coach. But Robert Katende refused and insisted that Phiona buy beds and mattresses for her family, since they slept on couches on the floor all the time. This Olympics was followed by several more international tournaments. 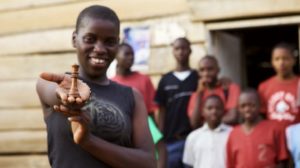 Upon her return home, the girl was greeted as a national heroine. Journalists from leading international channels were interested in her. Numerous videos were filmed. Then a book with her biography was published, and in 2016 there was a premiere of the film «Queen of Katwe», based on the biography of the chess player. 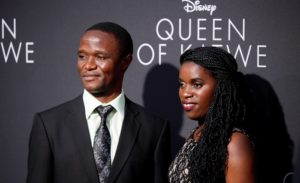 Phiona Mutesi, sharing her memories with her biographer, said:

«In the beginning, chess meant just a bowl of gruel to me. But then they gave me the opportunity to go to school, to learn to read and write.»

Before taking chess, Phiona lived in a slum and thought that was the way it was supposed to be. Then she saw that life could be very different. Her coach, Robert Katende, confirms his student’s words:

«Chess teaches you to assess situations, make decisions, be disciplined, be patient and not give up. All these qualities are needed not only for the next game, but for real life».

LIFE STORIES 0 27 views
Finding true love in this life is an indescribable feeling. It brings people together