The dog rescued the child and pulled his favorite ball out of the pond near the house with a net.

A clever dog saved a child from falling into a pond and, using a net, pulled his ball out of the pond.

The 47-second clip shows two children playing in a garden near a house and their ball falling into a pond. At the beginning of the video, a sheepdog sits peacefully in a garden in Shenzhen, China, and watches two young children toss a toy between them.

The older girl accidentally launches the toy too far, and it lands in a fish pond, where it disappears into the water. 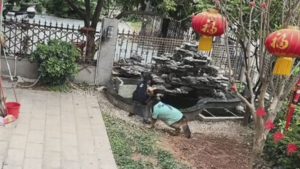 As she runs off to get her mother’s attention, the boy rushes to the pool and tries to fetch the ball himself.

The dog reacts quickly and notices that the boy is about to fall headfirst, so he grabs his top with his teeth and pulls him back to safety.

The distraught child resists, but eventually gives in to watch the dog’s next move.

The Alsatian picks up the family’s fishing net and stands on the side of the pool, using his mouth to direct the net underneath the orange ball.

After just a few seconds, he successfully scoops it out and onto the floor, then picks it up and takes it to the young boy. 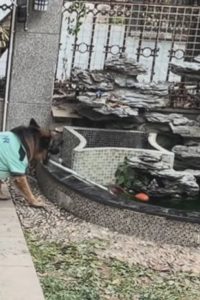 Feeling amazed, the little boy pats his dog on the head and looks chuffed to have his toy back.