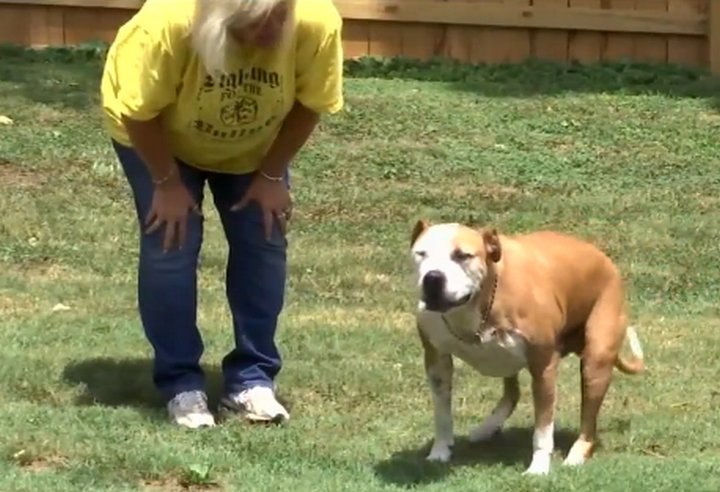 A homeless pit bull unexpectedly intervened in a robbery, protecting a woman from a criminal. The incident occurred in the evening in Knoxville, Tennessee, when the victim was returning home after work.

Suddenly, around a bend, an unknown man attacked her. The robber demanded all her money, jewelry and other valuables.
The criminal stated that if she did not give what he demanded, he would use a weapon. When the man began to twist the woman’s arm, a homeless pit bull lying nearby reacted with lightning speed. The dog perceived the aggressive behavior of the man as a threat and growled at him.

When he shouted at the woman to hurry up, the pit bull pounced on the robber and clung to him with his teeth. The man managed to stab the dog several times before it bit his hand. At this time, the woman managed to call the patrol, which was nearby.

The police arrived at the scene just a few minutes after the call. A frightened woman and a bloody dog appeared before their eyes. The animal was urgently taken to the veterinary center.

Surgeons who operated on the dog reported that it was on the edge of life and death at least twice, but they managed to save it. The pit bull’s treatment was paid for by the woman he saved. Chief veterinarian Carla Welch said that the woman is going to take the dog for herself after she is completely cured.

The police officer who was part of the squad that arrived at the scene, Timothy Clay, is confident that the criminal will soon be caught. The police have the blood of the robber. In addition, the man could not have gone far, because he received serious bites.

Experts have determined that the pit bull is 7 years old. The police consider the dog a real hero.