A video surfaced online showing a nine-year-old boy saving his 11-month-old brother who was falling from the changing table.

The footage of the rescue was captured by a security camera installed in the baby’s room. Tila Levy, a mother of five from Florida, put the baby on the changing table and turned away for just a second to say something to her older son. At that moment, the toddler began to roll toward the edge. But his brother Joseph showed great courage and reaction and caught the baby in mid-flight. 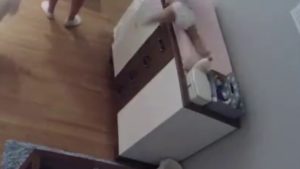 “Not my proudest moment as a mom, but I wanted to create awareness and show that our lives can be changed when you’re doing something like grabbing the baby wipes,” the 35-year-old remembers.

“I turned to the side to face my 6-year-old, who was worried about his homework. I said, ‘Just let me finish with the baby,’ and that’s the moment Eitan rolled off.” The boy himself reported that he felt an external force pushing him forward. The frightened mother said she decided to post the footage on the Internet so that other parents would not repeat her mistakes and keep a closer eye on their children.

The mom of Danelle, 13, Joseph, Zion, 6, and twins Eitan and Eliana knew she was opening herself up to criticism when she posted the video. “I’m OK with the nasty comments. I don’t care,” she tells Us. “I actually just got a private message from someone on Facebook saying, ‘You should not have anymore children.’ But we all make mistakes. We’re all just doing our best.” As for Joseph, Levi says he’s relishing in his new hero status.

We tried to reward him for what happened. We said,

‘You can pick anything you want, we want to buy you a present,’

‘For what? For saving my brother? I don’t need a present for that.’