The deed of a small town dweller is a living example of the fact that in ordinary life there is always a place for a real feat. The boy managed to save his family from a burning apartment. He is only 9 years old, but in a dangerous situation he behaved like a real man, overcoming pain and fear.

They hug as if they hadn’t seen each other in ages. Although just a few minutes ago, they were playing and drawing together. Their mother can barely contain her emotions. After the fire, the children feel even closer to each other.

Charred walls, burned furniture, and even the things that survived are unusable. Every detail here is permeated with the acrid smell of burning.

That day, Lyonia and Vasilisa were alone in the house, playing in their room. Suddenly, a vacuum cleaner standing nearby began to smoke. The boy pulled the cord out of the socket. But then the appliance exploded, and within minutes the apartment was ablaze, blocking the children’s way outside. 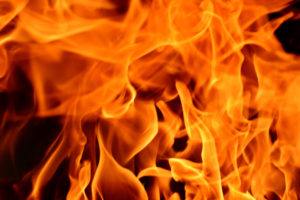 “I turn around, that light bulb over there is no longer visible. I ran, took a white rag here, wet it, gave it to my sister, she held it to her mouth. Then, it turns out, I found a rag,” says the boy.

So, with both of his arms broken (he had fallen from a swing a few days before the accident), the boy was able to get his 7-year-old sister and dog out of the blazing apartment. He did everything right, firefighters say, and gently shake the young hero’s hand. 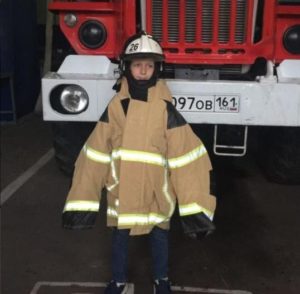 The family visits their burned-out apartment every day. But they temporarily live with neighbors. All of them are also very grateful to the boy. After he led his sister and dog out of the blazing house, the boy came back and started knocking on doors to report the fire. That’s why it was quickly extinguished. Other apartments were not damaged.

In his hometown, all they talk about is the boy’s decisive action. After all, his actions in an emergency – an example for other children.