A boy from the United States was born four months premature and made it into the Guinness Book of World Records.

Doctors in the United States managed to save a boy who was born at 22 weeks of pregnancy, more than four months ahead of schedule. According to the site of the Guinness Book of World Records, Curtis Z. Keith Means was recognized as the world’s most premature baby who managed to survive. 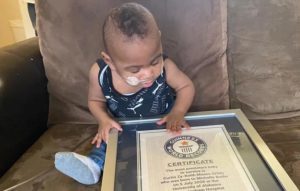 The baby who set the record was born in Alabama in July 2020. According to Michelle Butler, the baby’s mother, the pregnancy initially proceeded without any problems. However, on July 4, 2020, she needed urgent surgery. The woman was admitted to the University of Alabama Medical Center in Birmingham, which is known for its neonatology and pediatrics departments.

Butler wanted to keep the baby, and Curtis, who was due Nov. 11, was born July 5. The gestational age at the time was 21 weeks and one day. The newborn weighed only 420 grams. And doctors believed his chances of survival were less than one percent.

Nevertheless, the boy responded well to treatment and began to gain weight quickly.

“Our neonatal intensive care unit had never before seen such premature babies. We were literally walking into uncharted territory,” recalls Professor Brian Sims.

Curtis spent ten months in the university hospital and was able to go home with his parents on April 6, 2021. Throughout his recovery, the child was cared for by a dedicated medical team.

“I’m very proud of him because I remember how he came into the world and I see how he’s become now,” Michelle Butler admitted.

The Guinness Book of World Records has named Curtis Z. Keith Means the most premature baby in history to survive. Interestingly, the previous record holder, Richard Hutchinson of Wisconsin, USA, was born exactly one month before Means, on June 5, 2020.

LIFE STORIES 0 40 views
Jenny had always been a curvy girl. She was a beautiful woman who enjoyed

LIFE STORIES 0 80 views
Sergio parked his car near a bank branch. It was already late afternoon, but