“We knew the odds were unlikely, but marrying twins was very, very important to us,” twins Briana and Brittany say.

Most recently, they married brothers Josh and Jeremy, also twins. They were married by two priests, also twins. In fact, it was at a twins’ festival, so it wasn’t hard to get confused at this guest event. Moreover, the newlyweds announced that the wedding will not separate them and they are going to live together as a foursome, making their neighbors wonder who they are greeting. 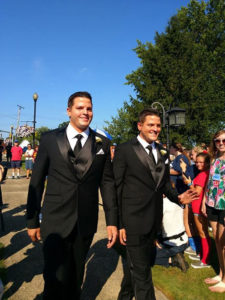 This wedding took place on Saturday. Both Brittany and Briana changed their last names to their husbands’ last names, the Salyers. It was important for them to celebrate the wedding on this day, as part of the twins’ festival. After all, this is where the couples met last year.

“I remember that even in kindergarten, my sister and I knew what we wanted for ourselves in the future,” says Briana, who married Jeremy.

And her sister adds, “We knew something like this was going to be very difficult. How did the stars have to align for our dreams to come true after all, for me to stand with the man of my dreams and my sister beside me with hers. ” 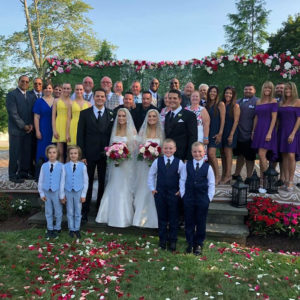 As you can guess, the sisters did not break tradition and wore identical gowns to their wedding ceremony. However, their husbands also wore matching suits. After the event, the girls began to give interviews remembering how it all began.

“I clearly remember the first time Brittany and I saw Josh and Jeremy at the festival. We got talking on the last day of the festival, and it was like in slow motion.” 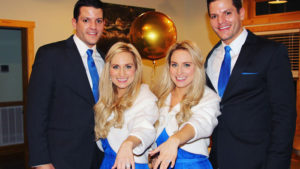 The girls had been attending the festival regularly for several years, while the guys were doing it for the first time in their lives. The fact that they would meet their future wives there never even occurred to them. But it turns out that both couples are deeply immersed in the twin subculture. They try to do everything in their lives at the same time. So it should come as no surprise that they also went on dates together and decided to have one wedding for the four of them. 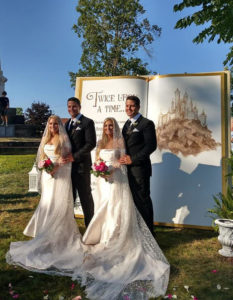 “The whole preparation for the wedding was very interesting and relaxed. Brittany and I like the same things, and we had the same vision for the event. The only difficulties came with the fact that we were organizing the wedding on the other side of the country, not at home, but at a festival grounds in Ohio.”

Josh and Jeremy had similarly decided for themselves that they wouldn’t get married until they both fell in love with identical twins.

“If they hadn’t met identical twins they both fell in love with, they never would have gotten married,” Brittany says. – Sure, they went on dates, but with girls who weren’t twins. But those don’t understand the bond that exists between us.” 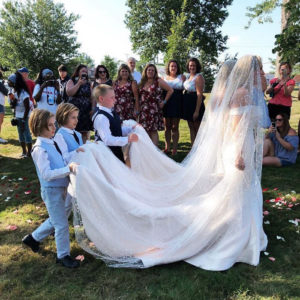 Now that both couples are going to live all together in the same house. Journalists, of course, have
a lot of questions about their living together. But they tactfully ask only the question of how the two are going to raise their children.

“When we have kids, our kids will actually be genetic siblings to Biana and Jeremy’s kids,” Brittany says. – Well it’s clear that they will actually be cousins, but technically genetically they will be siblings. We imagine we’ll be two mommies and daddies for them, and we’ll raise them all together, too.”