While there is no doubt that money is necessary to afford a luxurious life, it does not always guarantee happiness. Some of the most precious moments we live have little or nothing to do with money.

Sandrine Devillard was a glamorous Parisian who ran four businesses in her country, including a real estate agency. The blonde-haired woman was always dressed to the nines, putting on a show of elegance with her designer outfits. She was used to leading a luxurious lifestyle, which suited her attractive personality. On the other hand, Marcel Amphoux was a gap-toothed, eccentric farmer who lived in the French alpine village of Puy-Saint-Pierre.

Despite owning five cottages on valuable land, Amphoux preferred to live on the slopes near Puy-Saint-Pierre, close to the major ski resort of Serre-Chevalier in southeastern France. A French newspaper reported that he lived like a bear.

MADE HIM AN OFFER

The prime location of Marcel’s property meant it was worth millions. Sandrine was aware of this when she met him and expressed her desire to buy his land. If converted into villas, the cottages could be worth an enormous fortune.

Although the hermit owned the huts, he never worried about their financial potential. Even the people who lived in them paid very cheap rent. So, to Devillard’s dismay, Amphoux refused to sell the land.

The seductive Parisian lady was determined to change things, and asked him out on a date. Surprisingly, the eccentric bachelor, who used a bicycle to get around and claimed to converse with extraterrestrials, was captivated by her beauty.

After a brief courtship came shocking news that dismayed the entire village: the unexpected marriage. Although Sandrine assured everyone that she loved Marcel with all her heart, none of her claims were convincing enough for the villagers. On a cool, sunny day in September 2011, Amphoux and Devillard became husband and wife and sealed their union in the civic hall of Puy-Saint-Pierre, which had only 500 inhabitants and was surrounded by snow-capped peaks.

THE REACTION OF THE VILLAGERS

Sandrine wore a mauve silk dress and carried a bouquet of flowers. Her designer jewelry complemented her elegant attire. Marcel wore a gray suit, a mauve silk tie, a vest and his battered floppy hat.

However, the Alpine townspeople booed throughout the wedding ceremony. Their hostility was aimed squarely at Devillard, who had no connection to the village. One of the locals, named Jacques, said:

“People booed and jeered. Everyone knew Marcel well and felt that Sandrine was only after his property and money.”

Many suspected that the blonde realtor allegedly manipulated the scruffy landowner and was only after his wealth. The couple’s honeymoon was arranged in Paris, but Amphoux returned home alone after complaining that he hated the city. The newlyweds stayed in touch, but their marriage remained controversial. However, Sandrine hatched a perfect plan to prove her love to Marcel and silence the speculators.

In April 2012, she released a music video in which she sang a song called “L’appel Du Soleil” (The Call of the Sun). The footage showed Devillard dancing in the alpine meadows.

Amphoux appeared from behind with a hoodie and in the last moments of the video he and Devillard were kissing. The music video showed the glamorous Parisian’s transformation from city woman to rural housewife. At the time, Sandrine revealed:

“Marcel is a man of the Middle Ages, even prehistory. I am a true Parisian. I still live there. But I visit my husband whenever I can.”

Amphoux spoke to a local newspaper in June 2012 about his marriage and his relationship with Devillard and admitted that he hadn’t heard from his wife in a while.

The wealthy farmer also added, “I’m afraid of losing everything.”

In November 2012, Marcel was involved in a car accident in which his car plunged down a ravine in fog and he died. The driver and another passenger, both friends of Devillard, survived.

The driver was later tried for manslaughter, but was acquitted. The whole town attended the funeral of the “Hermit of the Alps”. Also attending the solemn occasion was the glamorous widow, 25 years younger than her late husband. 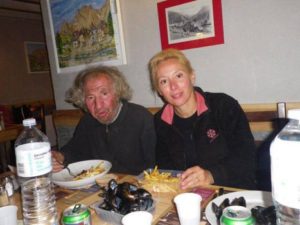 Sandrine dressed in black and is said to have thrown herself on Amphoux’s grave to show her love for her late husband. However, the locals continued to utter insults against the Parisian lady. Jacques recalled:

“People were furious with Sandrine, they kept letting her know it.”

THE TESTIMONY THAT CHANGED EVERYTHING

Under French law, it was thought that Devillard would be entitled to her husband’s vast fortune. But everything changed when, in 2016, the last will and testament of Amphoux was discovered, scrawled on the back of an envelope.
He had made it clear in his will that he wanted his money to pass to a cousin and the cottages to be bequeathed to the current tenants. Apparently, the wealthy hermit was anything but naive, for he left not a penny to his young and beautiful wife.

A furious Sandrine contested the authenticity of the will and claimed that it was not in Marcel’s handwriting. She also claimed to be a victim of breach of trust, attempted extortion and forgery by the new heirs.

But prosecutor Raphael Balland declared that handwriting experts had confirmed that Amphoux wrote the will. Thus, the lady’s accusations were rejected.

However, charges were brought against Devillard, allegedly she deceived her husband and was even accused of plotting against him. She failed to win a place in the hearts of the villagers until the very end.