James “Jim” Russell and Elinor Russell have a beautiful relationship and every year they find time to celebrate their anniversary. Jim was looking forward to spending their anniversary with his wife, but she was in the hospital. So the man decided to surprise her by showing up at her hospital room, dressed in a tuxedo and bearing gifts.

The husband and wife met during childhood, and when Jim returned from World War II, they met again. Their love story lasted many decades, and they still retained the spark. 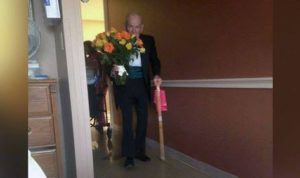 An anniversary in the hospital

The couple has traveled to Hawaii and Rome to celebrate their wedding anniversary. However, their 57th commemoration took place in a hospital.

Elinor was not in good health and spent a month in a medical facility. Although she surely imagined missing her wedding anniversary, her husband had other plans.

Jim showed up at the hospital in an elegant black and white tuxedo to surprise his sweetheart. The suit was something he had often worn in the past after he and his wife joined a dance club.

In addition, Jim presented Elinor with a bouquet of flowers and a basket of chocolate. After 57 years together, he still wanted to make his beloved feel like a queen. 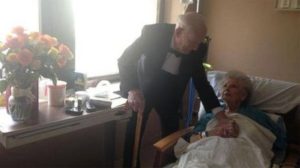 The couple’s granddaughter, Reid Russell, captured the sweet moment and shared it online. She captioned the post:

“My grandma is in the hospital, but it’s her 57th anniversary, so he showed up in a tux to surprise her with flowers.”

While it wasn’t a vacation to Hawaii or Rome, they did include some of the couple’s favorite things. They watched “Jeopardy!” and “Wheel of Fortune” after enjoying dinner together.

Jim revealed that his children encouraged him to think of something different to make their anniversary special. Elinor’s grandchildren also did their beloved grandmother’s makeup so she would be ready for the date.

It made her smile

For Elinor, the most important thing was spending time with her husband and her loved ones. They always sat together, chatted for hours and enjoyed each other’s company. The grandmother added:

“Being in a hospital bed, you get bored, so when he would come in, he would make me smile like in younger days when we would dance.”

The couple’s son, Bo, noted that his mother and father always made their anniversary a priority. Friends, family and strangers fell in love with the couple’s devotion and commitment. Many hoped for a relationship like theirs, and others applauded their unflagging dedication.