Unpredictability is what makes our lives bad and good at the same time. While some unexpected incidents can make us sad, we rejoice when life surprises us in a pleasant way. These events can make us smile on our worst days.

The little girl in today’s story was delighted when the post office staff told her they had a special letter for her. The envelope contained a royal letter, a reply from the Queen, who had seen the little girl’s pictures and read her message. When Olivia Akers wore a military uniform inspired by the Trooping the Color ceremony, she had no idea that Queen Elizabeth II would notice her. It all started when her mother, Natalie Akers, came across a costume contest being held in the UK.

After reading about the contest on the Internet, Natalie quickly sent a message to the organizers. She asked them if they would accept an Australian contestant, in the hopes that Olivia would be able to compete. When she received a positive response, she began preparing Olivia’s outfit.

From the red military uniform to the white gloves, Natalie put it all together to make her daughter look like the queen. She copied every detail of her outfit, hoping her little girl would win the competition. 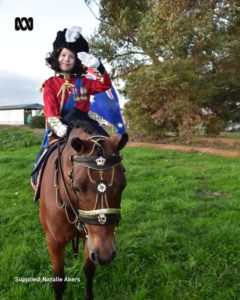 Olivia got on her pony, Lady, to have her picture taken. Once Natalie was happy with the photos, she sent them to the costume contest organizers. Unfortunately, Olivia did not win.

However, Natalie did not let her hard work go to waste. In June 2022, Olivia wrote a letter for the queen, and Natalia posted it with the photos of the little girl, hoping that Her Majesty would receive the envelope. Olivia wrote:

“Dear Queen Elizabeth, my name is Olivia Akers. I am eight years old and live in Tallygaroopna, Australia.”

In her letter, the curious girl asked the queen if she really did eat marmalade sandwiches. Olivia also wanted to know how many horses the queen owned. She explained to the queen that the saddle in her picture was from England, while her pony was Australian. Olivia wrote:

“I included some photos from an online horse costume contest that was intended for your platinum jubilee.”

After sending her letter, Olivia did indeed wait for a response. As days turned into weeks and weeks turned into months, the little girl asked her mom if the mailman had brought the queen’s letter for her. 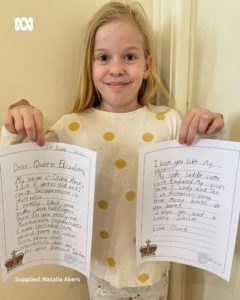 However, when Olivia and Natalie woke up on September 9, 2022 and learned that the Queen had passed away, they lost all hope of receiving a letter from her. Little did they know that “a very special letter” was waiting for them at the Tallygaroopna Post Office.

After Olivia left for school that morning, Natalie went to the post office to see if there was any mail for her. And to her surprise, the staff told her about the letter from the Queen. She was overjoyed, and immediately rushed to Olivia’s school with the envelope. Natalie confessed:

“We all got a little teary-eyed to see such a special letter arrive and it was probably one of the last letters she wrote.” Excited, Olivia opened the letter in front of her classmates and read it aloud. The matron of honor Annabelle Whitehead had signed the letter. After thanking Olivia for writing the letter, she said the queen was “interested” in seeing her photos.

“Her Majesty was touched to know that you, too, love horseback riding,” Whitehead said, before again thanking Olivia for writing a thoughtful letter. The letter was dated August 25 and arrived at the Tallygaroopna Post Office on the day the Queen took her last breath. Natalie said:

“The timing is pretty remarkable.” 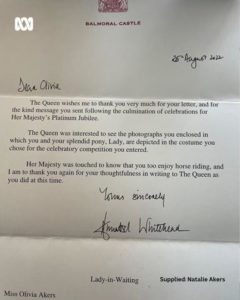 “I’m sure Olivia will cherish this letter for the rest of her life,” Natalie said.

Fans of the royal family consider Olivia to be one of the lucky ones who received a response from the queen during her final days.

POSITIVE 0 40 views
Vita Cresswell lived with her lovely family in Seaton, Cumbria, England. She and her