A woman named Albina Fouazi from Lillooet, British Columbia, won the hearts of many by awakening a child in her, even though she had already lived over a century. Albina Fouazi was 101 years old at the time. 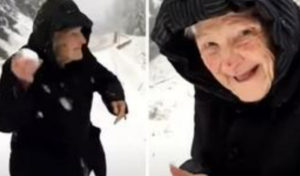 Her reaction to the snow was perhaps one of the most honest and sincere one can see in a centenarian in her entire life. She wasn’t just pleased, she was truly happy.

Armand, the woman’s son, posted the video on Facebook.

The video shows Albina giggling and smirking while making a snowball. After the snowball was ready, she threw it as hard as she could. Albina said it was a good time to go outside and play snowballs.

Armand said in the video:

“Here’s proof that if you find true happiness in the little things, you can live 100 years.”

Armand said it was raining in Lillooet and then it suddenly snowed, which is extremely rare in their area. As a result, he and his mother decided to check for approaching traffic. 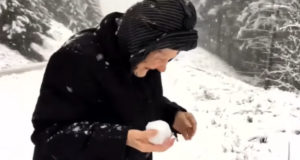 Armand made the turn three kilometers outside of town. But no sooner were they back on the road than the door suddenly swung open and Mom came out.

“When you have a mother who’s a hundred and one years old, it’s nice to have a camera around to capture memorable moments when they happen. This is one of them, right here,” Armand smiled.

People write in the comments that they can’t tear themselves away from watching Albina’s film.