We all know that fashion is ageless. It is an extremely varied world with a thousand different shades. The first thing that comes to mind when you think of fashion are fashion shows with dream models and their exquisite or eccentric dresses.

Nevertheless, this story will manage to surprise you by showing a side of fashion that you would never have thought of. As they say, it is never too late to achieve a goal, so a 99-year-old lady became a model thanks to her granddaughter and her cosmetics company… 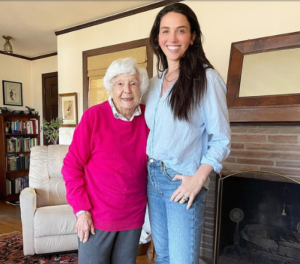 When young Laney Crowell decided to visit her great-grandmother Helene Simon to celebrate her ninety-ninth birthday, she had a brilliant idea, to say the least. For some time her company had been looking for a model for its advertising campaigns, but the human resources team had never been able to find the right face.

Then she had the genius idea: Grandma Helene would have been the new face of the cosmetics company, also because the elderly lady has been a direct consumer of the same company’s products for years. 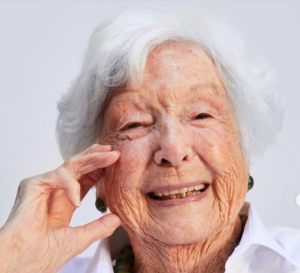 At first, however, Helene seemed adamant. She did not think it was a good idea because of her advanced age. The grandmother’s response to her granddaughter’s proposal was always and only one: “Absolutely not.” So Laney asked her 14,000 followers on social media for advice. After only a few minutes, everyone seemed to be enthusiastic.

The idea of an almost 100-year-old lady as a model electrified Instagram users, eager to see the old lady at work. Their enthusiasm was indeed enough to influence Helene to change her response into a resounding, “yes!” 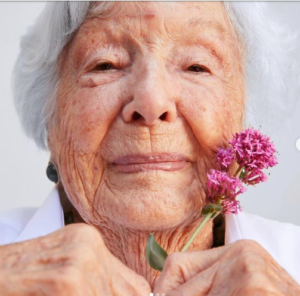 Saie is known for providing cosmetic solutions for people of all ages, skin tones and bases. When Helene finally decided to join her granddaughter for a photo shoot, she realized how much fun it was to be the star of the show!

In the ad, Helene modeled a particular type of mascara that really seems to be perfect for her. Despite her previous concerns, Helene realized that she had made a great choice by attending her granddaughter’s product launch, perhaps her last chance to model. 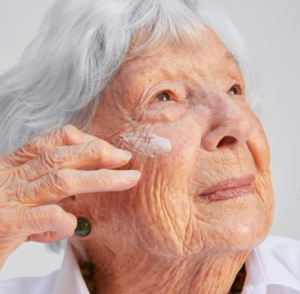 “I loved being on set,” she said. “The photographer was kind and very funny. It was certainly a pleasure to do the hair and makeup,” Helene finished.

The photos, in fact, speak for themselves! Helene is so radiant that she looks like she has never done anything else in her life other than modeling!

Congratulations to this great-great-grandmother for her courage and resourcefulness!