A seven-year-old girl named Chelsea came to the vocal show The Voice. Kids, where she performed the song “Girl On Fire” by the Alicia Keys.

And Chelsea was right to come! Already after the first few notes, two of the three judges turned to the young vocalist and pressed the red button, inviting the girl to continue participating in the project on their teams. It didn’t take long for the third judge to turn to the little girl. 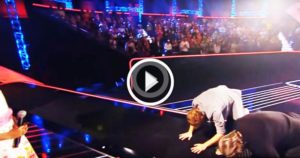 Toward the end of the song, two of the judges literally fell to their knees in front of Chelsea, showing absolute delight in her talent and performance!