This week, while working on the farm, the veterinarian suddenly heard sounds in the distance. He couldn’t ignore it, as it was a desperate sound, like a cry for help .

“I immediately ran to the spot,” the man recounted. “There was a landslide. I saw a dog stuck in the ground. Only her head was left above the ground.”

The dog was in trouble. But, as it soon turned out, it wasn’t just her life she was worried about. “When I first saw her, it was very upsetting,” the man said.

He knew he had to act.
Quickly grabbing a shovel, he began digging. 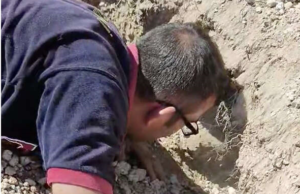 As the man began to dig up the dog, he suddenly heard a sound. The sound was very faint.

“I heard puppies screaming,” the man said. – They were underground.”

When the dog was safely retrieved, the man continued digging to save the babies. 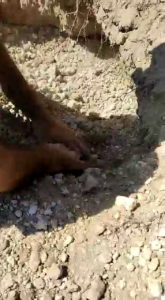 All told, the man saved seven puppies who’d been buried alive after their underground burrow caved in — much to the relief of their worried mother. Thanks to the man’s quick thinking, the furry family was now safe and sound.