The world’s tallest and smallest man met near the pyramids. Sultan Kösen, 35, from Turkey, is the tallest man in the world, his height is 251 cm, and the 24-year-old smallest woman Jyoti Amge from India, the girl is 62.8 cm tall. 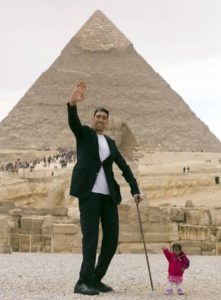 But Sultan Kösen is the tallest in our time, but only the third on the list of the tallest people in history. In second place is Ukrainian Leonid Stadnik, who was taller than Sultan by 2 centimeters. 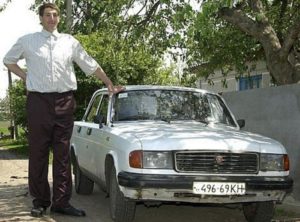 Ukrainian giant Leonid Stadnik was born in 1970. At the age of 12 he had a tumor removed from his head. But the tumor damaged his pituitary gland, and Leonid began to grow very quickly. Stadnik continued to grow into adulthood — 2-3 centimeters per year. Leonid Stadnik worked as a veterinarian. There were constant problems with his size in the house. Then it became difficult for him to walk — he used a special support. He died at the age of 44 from a brain hemorrhage.

The tallest man in the world was the American Robert Wadlow. His height was 272 cm and his weight was 199 kg. At such a gigantic weight he was very thin. 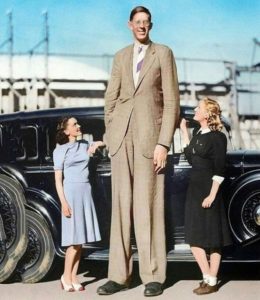 Robert was born normal, his parents were just above average height. But at the age of four, he suddenly began to grow very fast. At the age of eight, he already stretched to 188 centimeters. And at the age of nine, he could easily carry his father up the stairs. He had a malfunction in his pituitary gland, the part of his brain responsible for producing hormones. These are hormones that affect growth, metabolism, and reproduction. In Robert’s case, the malfunction affected the uncontrolled production of growth hormone. 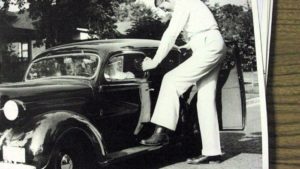 Simple everyday things were very difficult for the young man. Over the years he found it difficult to do even the simplest things. It was not only that ordinary things were too small for him, and cars and apartments were too cramped. Robert was developing circulatory problems — his heart was failing to cope, pumping blood through his body. And because of that, his limbs could barely feel anything.

Wadlow wanted to become a lawyer, went to university. But then he realized that with his peculiarity it was much easier to realize his potential in the circus. So Wadlow became an entertainer. By that time he was already well known in the U.S. — all the local and world media were trumpeting about the giant young man. The guy was very funny and positive, people really liked him. 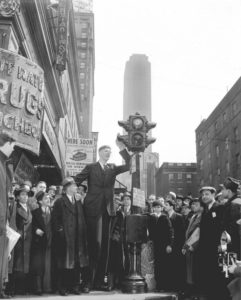 Unlike the previous two members of our selection, Wadlow grew much faster. And it wasn’t long before he needed crutches. Wadlow died in his sleep in 1940, he was only 22 years old. Now there are fewer and fewer such giants because the disease has been cured.