It’s a cute moment when a little girl tries to convince her huge dog to take a bath as convincingly as possible. After spending some time in the backyard, Phil the adorable Malamute is very tired. So he snuck into his little sister’s room for a nap. But his mom is far from thrilled about it, because Phil’s paws are full of dirt, and his fluffy fur is just wet and dirty. So she asks him to take a bath, but he doesn’t seem very happy about it. Since Phil is not too impressed with the way Mom and Dad are trying to convince him, they call their baby girl, Amelia, who is Phil’s best friend. And that’s where the adorable conversation begins. Guided by her parents, the tiny girl approaches her friend and politely obliges that he really needs a warm bath! 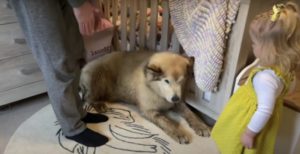 «Come on, buddy… come on, come on,» little Amelia says to him.

«Oh, he’s sad. Be nice to him and tell him it’s time for his bath. Maybe give him a kiss on the ear,» says the girl’s daddy.

The girl gently kisses her «furry friend» in the ear and even strokes him, but Phil does not move. Even a little treat doesn’t convince him.

Eventually, after titanic efforts from everyone in the house, Phil finds his way to the bathroom! «You won’t believe this! Phil actually got in the tub himself after Amelia convinced him,» Amelia’s mom wrote in the video description.

«He loves that little girl so much!»

«Sleeping Beauty»: A red-haired street cat made famous by his 20-hour nap
Six years ago Jay found a little kitten in the street. The animal was
ANIMALS 0 40