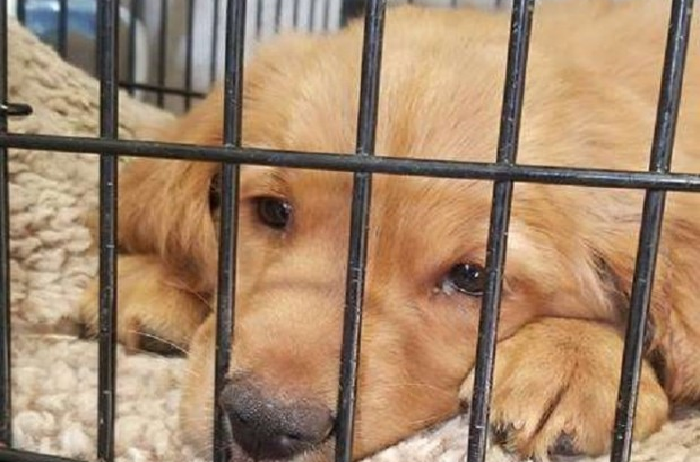 Once the Reyes couple were walking down the street of one of the California towns. On the side of the road they saw a cardboard box with a garbage bag on top of it. It is quite possible that Gloria and Guillermo would have passed by the package, if not for one thing: it moved. The couple realized that there was someone alive inside.

The Reyes opened the package and saw that there was a small golden retriever puppy inside. The adorable baby was gasping for air, and his eyes were full of tears. Another couple of minutes and, most likely, the puppy would be dead.

The couple took the weak little dog to the veterinary clinic. It turned out that the retriever got oxygen starvation. Several doctors took care of the puppy at once. He was found to have many diseases. Apparently, the previous owners decided that it was cheaper to get rid of the dog than to treat it. Now the baby is gradually getting better.

Despite the fact that the puppy was treated so inhumanly, he is still very kind. The animal is happy to play with people. To every person in the shelter, he happily wags his tail and licks everyone who strokes him.

After the little golden retriever recovered, he was transferred to an animal shelter. There was a huge queue of those who wanted to “adopt a baby” behind him. Now the volunteers of the shelter have a difficult task – to find worthy owners for the dog.

POSITIVE 0 57 views
When we grow up, life teaches us that we must work to earn a

POSITIVE 0 61 views
Every child has a hero, and usually it is always a cartoon or comic

POSITIVE 0 39 views
Once upon a time, a Filipino boy named Manny Pacquiao didn’t even have a