The models range in size from 5 to 7.5 cm each, described in Basic Archaeology as depicting birds, lizards, amphibians and insects. Many of them are still on display at the Museum of Bogotá.

What makes these model airplanes so amazing is that they are aerodynamically accurate. In 1994, German aeronautical engineers Peter Belting and Konrad Lubbers created larger-scale radio-controlled models of these artifacts. They proved that the designs fly both with a simple single propeller piston engine and with jet thrust. 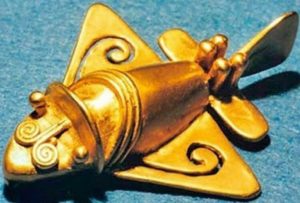 The astonishing realism of these artifacts is striking, especially considering that mechanical flight was not known until the Wright Brothers’ 1903 flight. How, then, was a pre-Columbian civilization in 1000 B.C. able to understand advanced concepts of aerodynamics and wing design? After all, this was a civilization that had barely developed the ability to use bronze tools, still lived in brick buildings and used living flames for lighting. 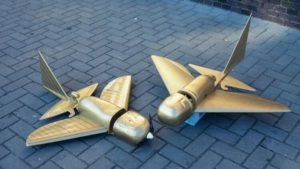 There can be only one plausible explanation: at this time there were highly evolved beings on Earth who probably built these “winged flying machines”. The planes of the Quimbaya are miniature copies of these flying machines. The Quimbaya people probably believed that these were magical beings, and hoped that small versions of them would bring magical power to the owners of these golden artifacts. These “aliens” probably flew them, crossing continents and oceans, visiting many parts of the planet, as documented in many ancient scrolls.

There is also a version that the creators of the ancient planes are not aliens from outer space, but quite terrestrial people from the lost Atlantis. Most of the discovered gold products are made of tumbag alloy with 30% of copper, very similar to the mechanisms mentioned by Plato in his “dialogues about the lost Atlantis”. And probably flew them “vimanas”, pilots described in the ancient Indian book “Mahabharata”.