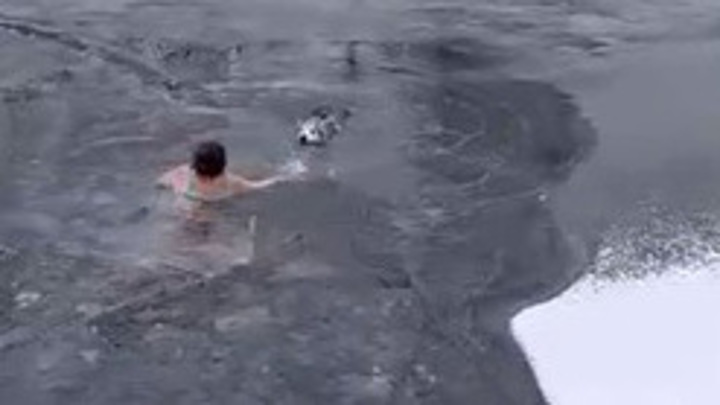 The incident occurred on Sunday, February 6. A husky dog got into a local pond and could not get out on its own. The dog was already tired and began to sink. It was noticed by women passing by. One of them did not hesitate and hurried to help the dog. All of a sudden, the two women heard a dog crying, and they soon realized the poor thing – a Husky – was stranded in the icy river next to them. It is when the 65-year-old woman striped her clothes and stepped up to save the helpless dog. Without a second thought, Galina put her life on the line and braved the icy water to take the dog to safety on shore. Her friend caught the entire moment on her cellphone. 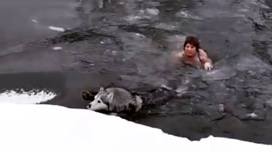 “On Sunday, I was walking with my friends by the river and heard the plaintive howl of a dog,” the woman told.

” There was a husky stuck in the water close to the shore and could not get through the ice to land. Without thinking twice, I undressed and jumped into the water to help him.”

It is unsure how the dog ended up in the river, but he might tried to cross it over and eventually got stuck. When the heroic woman has taken him out of the river, he look injured at on of his legs. “There was ice, and because of this, the dog could not get ashore, so I broke the ice with my body,” Galina said. “No I don’t consider myself a hero. I think anyone would do the same.”