Pets continue to surprise their owners. Sometimes they are able to do things that, in principle, are not typical for them. For example, play musical instruments.

Buddy Mercury is one of those pets. He became popular on the Web because of his piano playing skills. 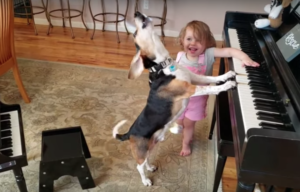 Meet Buddy Mercury, one of the most musical dogs in the world. He was named after the Queen band leader because he loves to play the piano and sing. Buddy is a beagle, but probably not the purebred. He was adopted from a shelter, so no one is vouching for the dog’s pedigree. But his little sister doesn’t care what kind of breed Buddy is. After all, he’s fun to be with, and that’s all that matters. 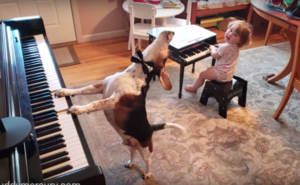 Buddy’s owner talked about how they first met him:

“We saw him at an animal shelter event. And we decided we had to bring him home. He’s one of the kindest and sweetest dogs I’ve ever met in my life. Buddy not only gets along with people, but other animals as well (cats are no exception!).” 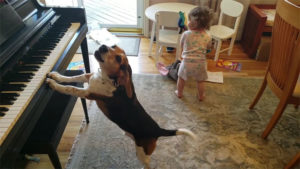 Buddy plays the piano several times a day. In fact, even Buddy’s owner has a weakness for music-he is a drummer.

Everyone in this family loves art. When the baby dances or sings, the pet is inspired and rushes to play something on the musical instrument.