Four boxes were found in a quiet alley in English Stratford. They were taped tightly together and stacked on top of each other. People wouldn’t have noticed the boxes, but there were loud screams coming from them. Passersby called rescue workers and volunteers to the alley, who arrived just in time. It turned out that the cats were sitting in the boxes and they would only have enough air for a couple of hours. Whoever had locked the animals in the boxes had not bothered to provide them with an air supply.

Volunteers rescued a total of 11 cats, all of which were over a year old. One pet was black and white, and the rest were redheads. The volunteers decided that the animals were related to each other. In addition, the animals were well-fed and groomed. This means that until recently they had had owners who took care of them. Cats were not afraid of people. On the contrary, they willingly went to the hands and responded to affection. 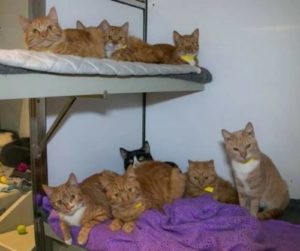 All the animals were taken to the shelter, where they were examined by veterinarians. The media reported about the unusual find in the alley and the shelter began receiving calls from dozens of people who wanted to help, either with money or to give the cats a home. Very soon all the animals left the shelter for their new homes with loving owners.