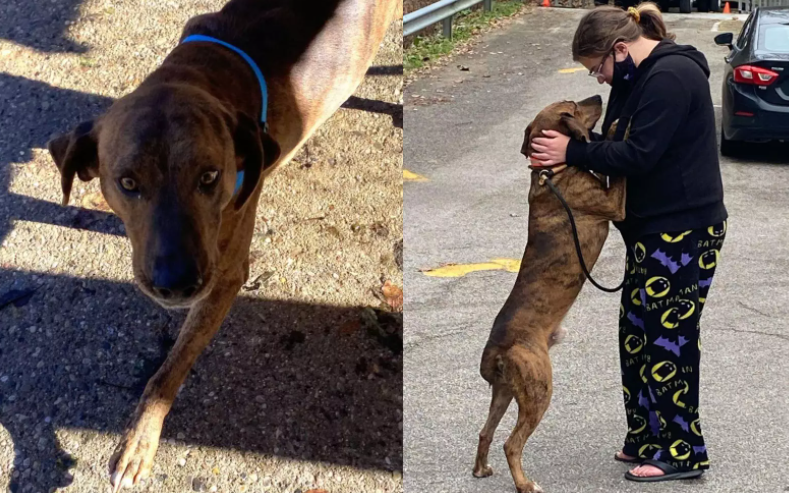 A stray dog named Picasso was found by employees of the Kanawha-Charleston Humane Association animal Shelter in November last year. He wasn’t wearing a collar. And no one ever called the shelter to pick him up. Therefore, the staff began to look for a family for the dog.

But Picasso coped with this task on his own. One day he helped a strange girl on the street to cope with a sudden panic attack, and soon became her pet and best friend. The friendly dog, along with his tailed brothers and sisters, was walking during the Christmas parade when he saw 16-year-old Abby Ellis, who was sitting on the side of the road with her head on her knees. Picasso pulled the volunteer he was walking with towards the stranger. And then he snuggled up to her to calm her down.

“Abby’s head was lowered to her feet. Picasso managed to get under her body to support her. Then she began to recover. If it wasn’t for this dog, Abby would have fallen and hit her face on the asphalt,” Melissa Smoot, Abby’s mom, told The Dodo. When Abby felt the dog’s warmth, she began to stroke him, and gradually the panic began to recede. The girl felt safe and was able to get back on her feet. After that, she returned home with her mother. All evening she did not stop thinking about her tailed savior. So the next day she went to the Kanawha-Charleston Humane Association shelter. Seeing Abby, the dog immediately remembered her and ran up to hug her. At that moment, the girl realized that Picasso would go home with her. Despite the panic attack that happened at the parade, Abby does not regret that she went to it. After all, thanks to this, she has a new best friend who not only loves her, but also knows exactly when she needs help.