Scotsman and professional runner Dion Leonard participated in a challenging marathon race through the great Gobi Desert, which partially occupies Chinese and Mongolian territory. The route was not an easy one. And its total length was 250 kilometers, which took the marathon runners six days to overcome. 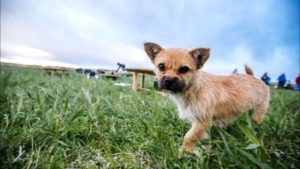 On the second day, right before the start, Dion noticed that a small and unsightly stray dog of a color that resembled desert sand was on the line with him. When the animal ran with Leonard, he was surprised, as were the other runners and all the organizers.

Dion thought the dog would quickly quit the race. But she survived the entire day’s journey, during which she covered 37 kilometers. It was unbelievable. But even more amazing was that the dog decided to participate in the marathon and further, literally accompanying Leonard. However, because of the scorching desert sun she suffered a heat stroke, and the four-legged runner was assisted by the medical team on duty in the car that followed the marathon runners. 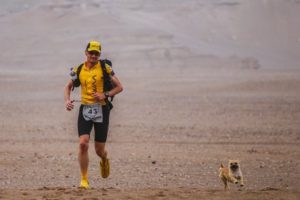 The dog was named the mascot of the marathon and was named Gobi after the location. The four-legged runner covered a hundred kilometers in four days out of six. And Dion realized that the dog chose him, so the man just couldn’t help taking his new friend with him. But complications arose. To transport Gobi from China to Leonard’s homeland, he needed official permission, which proved difficult to obtain. Also, funds were required. 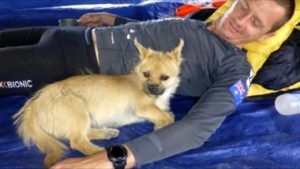 The story had an unexpected sequel. While Dion was dealing with bureaucratic problems, Gobi disappeared from sight. But Leonard didn’t give up. He started a fundraiser on a crowdfunding site and managed to raise as much as 15,000 British pounds out of the required 5. And he also wrote a message on social networking sites and asked concerned people to help find his lost dog. Later the marathon runner himself came to the city where Gobi was last seen and, with the help of volunteers, put up advertisements. 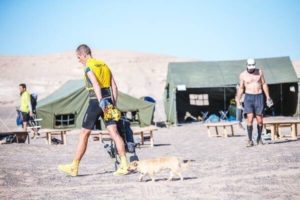 Fortunately, Gobi was found and finally ended up in Scotland. Dion is happy that he was able to overcome all difficulties and be reunited with his four-legged marathon companion. And the dog has already made friends with his owner’s other pet and is doing fine.

Inspired by Gobi’s endurance and devotion, Dion has co-written an entire book about his pet with writer Borlas Craig. We might even be able to see a movie based on these incredible but very real events.