A girl was returning home after a day spent in college. She noticed a cat on the sidewalk. The animal was very small, and in front of it was a sausage almost as big as the cat. The problem was that there were three big dogs around the cat at once, barking and jumping on it, trying to take the little one’s food away. 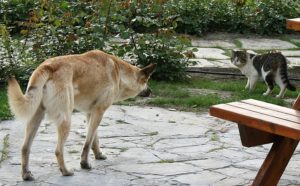 The cat hissed and tried to make itself look intimidating. It was obvious that it was determined to defend its prey. The girl was surprised at the great courage the little cat showed. So she could not pass by and drove the dogs away and took the little one. 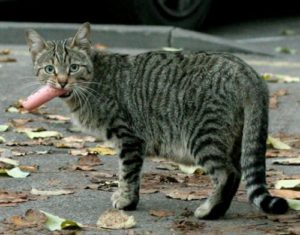 The cat, which was named Fifty. It turned out she was only three months old and had been living on the street since she was born.

Despite her combative nature, Fifty shows affection and tenderness to her owner as if thanking her for rescuing her from the street. Fifty also got to know another cat who lives with the girl. The animals have not become best friends, but they try to respect each other’s boundaries. 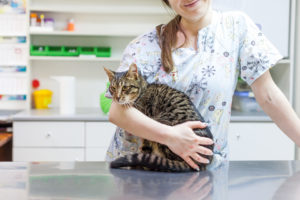 Fifi grew up and became calmer, but she remained fearless and assertive. The little cat was very lucky, because in an almost hopeless situation she not only saved her dinner, but also found a family.