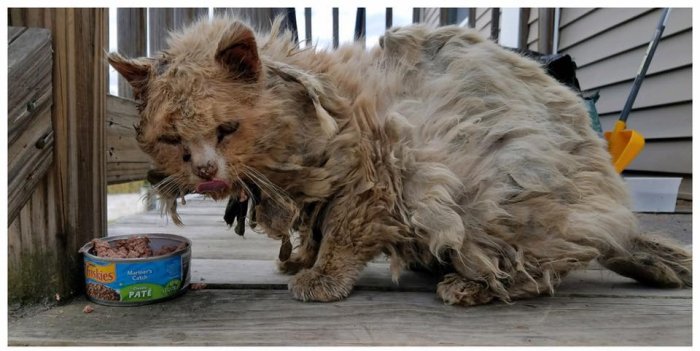 Stray cats have a very difficult life. The lack of shelter and food, as well as the cruel treatment of them leaves a deep mark on their little souls.

“The events held by our founders became one of the first in the country to use the “catch, mark and return to normal life” method to improve the lives of stray cats.” Then a whole raid was carried out to catch abandoned cats. Then most of the animals were caught. They were marked with special tags and fed twice a day. They were also monitored by veterinarians. Those cats that demonstrated the ability to return to their former life with people were given to foster families. Frisbee was in bad condition. The wool was dirty and in pellets, and he also had very rotten teeth. As the rescuers wrote: “He was found with terribly rolled hair (this has not been seen before), very thin and hungry. The cat was caught as part of the “catch, mark and return to normal life” program and soon noticed that he was very friendly and needed serious dental surgery.”

The cat was put in order, his teeth were brushed, the pellets were cut and he was bathed. In one day, Frisbee was transformed beyond recognition. The photo of the cat was uploaded to the official page in the social networks of this organization and signed:

“We hope that Frisbee will have a new home soon! Come this week to meet him and our other cats!”

Fortunately, our hero of this story was taken literally a week later. And now he even has a favorite chair in his new home. The fur that was shaved off by rescuers has already grown back.

Good luck to you, Frisbee!