A stray feral cat came to the animal shelter pregnant. The cat was so wild that when she had kittens, the cat wouldn’t let anyone near them for a long time.

His siblings were playful and quick to run around. And only Blacky, that was the kitten’s name, could barely move around and also tried to play.

Two months later the mother cat and the healthy kittens were taken apart. And the kitten with a congenital defect of legs, the chances that someone would want him, almost none. The vet recommended tying the legs with tape so they would become straight. But there was no positive result from such measures. 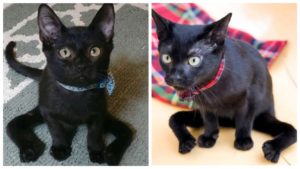 And so the baby grew up with spider legs. Kitten Blacky was lucky to find a woman who saw the baby and immediately attached to it with all her heart.

She understood that this poor kitten needed special care and she wanted very much to help her baby and make his life better. Blacky became a full-fledged member of her family.

Blacky grew up, but his gait was different from the other cats. He could not jump, but he loved to play, especially to ride on the sheetrock from the slide. 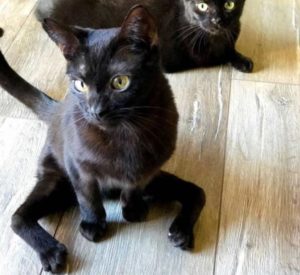 Blacky didn’t realize that he was different. For all his innate flaws, the kitty remained kind and affectionate and loved his owner, who took care of her pet.