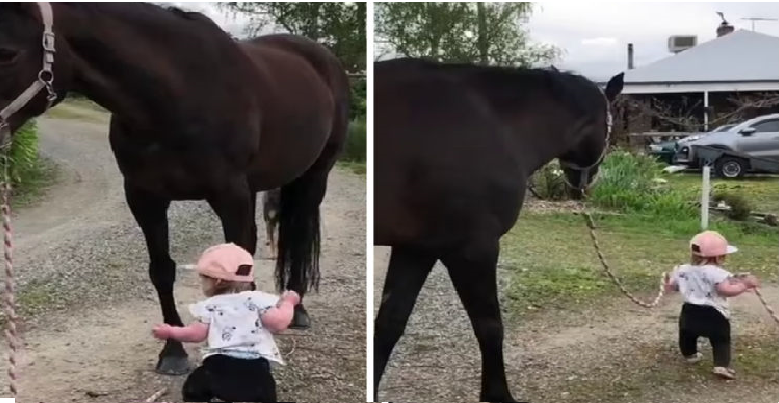 Despite being only 15 months old, this little girl is already brave enough to take the family’s 1,000-pound horse for a walk on their farm. But with such a gentle giant four-legged friend, everything is much easier. This couple became friends before the baby was born. So you can only imagine how close they are. Despite the fact that she can barely stand on her feet, the little girl carefully takes the horse’s leash and walks away, and the animal carefully follows her. Two dogs also join the pair. The touching moment was captured on camera by one of the family members.

This wonderful moment happened on a small farm in Macclesfield, Victoria, Australia!

“I can’t stop looking at it, this horse is so cute, so calm and gentle, and the baby is just adorable,” was one of the most appreciated comments. While another viewer wrote:
“Gentle patient horse. Animals know children and do not harm them.” Despite the fact that these charming shots lasted less than a minute, they went viral on social networks and gained millions of views. However, not everyone agreed with this. Some viewers criticized the parents for allowing such a small child to be near a huge horse.

“It’s cute, but such a small child walks with a horse???. I don’t understand such parents??? Even if the horse is gentle, you never know what might happen,” one person wrote.

What do you think of it?