Little puppies are the cutest of creatures and need a lot of care and attention.

A little over a year ago, a female pit bull was found at the door of the Society for the Prevention of Cruelty to Animals (SPCA) in Sacramento, USA, in the early morning hours.

Beside her were ten small puppies, just a few days old.

The owner was nowhere to be found. Whoever had dropped the dogs off, he left no information about them, not even food or water for the new mother and her children.

The dog was not tethered, so she was free to leave her puppies. However, she stayed by their side, diligently performing her maternal duties.

And because she proved to be an intelligent and caring mother, all the puppies were healthy and feeling fine when they were found. 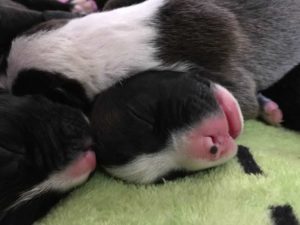 «We don’t know exactly how she ended up near the shelter,» said SPCA coordinator, Sarah Varani.

«Although the dog continued to bleed a little, there were no obvious signs of the kind that are usually present when a large number of puppies are born. So we assume she gave birth elsewhere and was abandoned near the shelter afterwards.»

The shelter was happy to take in a large family, but they didn’t know how to house them together. Separating the pups from their mother was bad for their physical and emotional health. 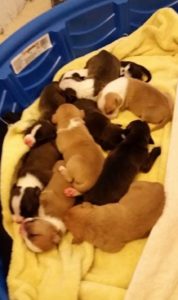 Fortunately, there was a man willing to take the four-legged mother and all her babies into his home.

Although abandoned by her previous owners, the female pit bull has maintained her trust in humans. Animal protection staff and her new owner describe her as «an incredibly kind girl.»

She didn’t hesitate to let the staff pick up her babies without the slightest hesitation. 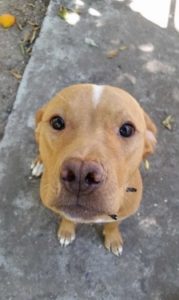 The puppies will spend the next two months in their foster home until they are old enough to be adopted.

In the meantime, the four-legged pets’ new owner is enjoying caring for them and posting photos on social media.

«I am glad that there was someone who agreed to take mom and her puppies, and I’m sure it will change their lives. We wish them all the best!» 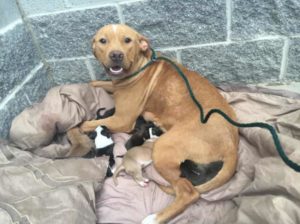