Ray, an 8-year-old Labrador retriever who had been abandoned by his family, was found walking alone on the streets of Torrance, Calif. His eyes were crusty and sad. His physique was skeletally lean and his fur coat was missing due to starvation.

When a dog is abandoned by a family, it is a heartbreaking sight. Family members may refuse to care for a sick or elderly dog. But they have no idea how much suffering the dog will endure if it is abandoned. 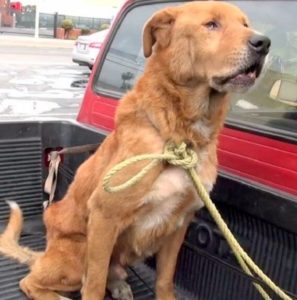 Workers at the Carson Shelter in California rescued Ray. Thanks to shelter volunteers, Ray regained some of his health, but he remained depressed.

He was soon put up for adoption. 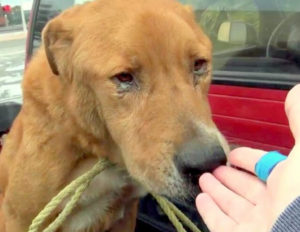 At the time of this writing, Ray was adopted! Ray’s attitude toward people has not changed one bit. He still greeted everyone with enthusiasm, with love. We pray for Ray’s speedy recovery and that he will continue to be showered with love and care.