An animal protector found a homeless kitten in dire need of medical attention. This kind woman is known by the nickname @MoongladeRose, we’ll just call her Rose.

The vets were able to bring the kitten back from nearly the dead. 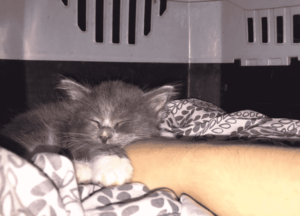 Rose named the baby Opie and brought him home from the hospital. However, she didn’t know how her pet cat, Andy, who had also been rescued by her some time before, would react. As soon as Andy heard the little guest’s squeak, he immediately ran to the sound.

The adorable cat wrapped his paws around his new neighbor and began diligently grooming him, as if he wanted to comfort the frightened baby and show that he was welcome here.

“Andy was welcoming from the first seconds and wouldn’t stop hugging and kissing Opie,” Rose recalls. 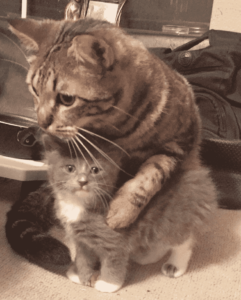 Night fell, but the adult cat still did not want to leave his tiny buddy. He stayed behind to guard him, as if he were a caring older brother.

He took Opie under his wing, and they instantly formed a strong bond. 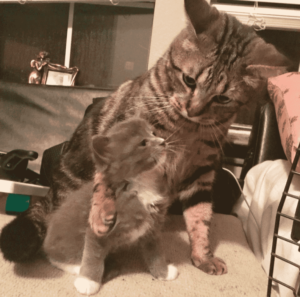 Andy really surprised his people with the adoration he showed for the new family member. Like Opie, Andy was once found at a gas station and saved from certain death. 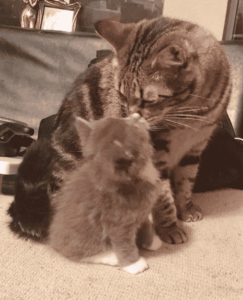 The next morning Rose was awakened by a meowing in two voices – it was our two lovebirds demanding attention and love.

“Opie seems to trust me and fall asleep quietly next to me. This little lump fits in one hand. And Andy loves him very much.” 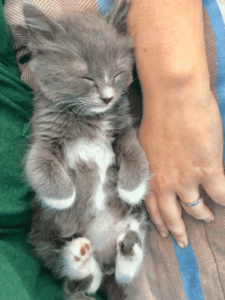 For the next two weeks, Rose got up regularly at night to feed the kitten. After each meal, Opie climbed onto her chest, curled up, and fell asleep with a sweet purr. 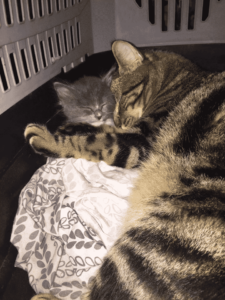 Before Opie came along, Andy was almost constantly hanging around Rose.

Now he never leaves his little brother unattended for a second, taking care of him and lovingly licking his fur.

Andy gives his brother lots of love and sets a good example. He has already taught him to go to the litter box, hunt, play, and land on four paws. But most of the time he teaches Opie the art of cuddling. 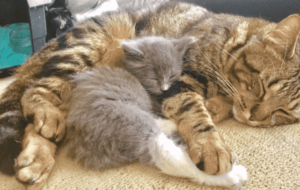 It’s been six weeks since the little stray kitten joined the family.

The two pets have become even more close. “Andy is endlessly adoring and protective of Opie. My lucky boys! I am so lucky.”