Two men had a real experience during a routine fishing trip when they noticed two strange figures in the water. When they swam closer, they discovered that the two figures were actually two bears trying to swim. The fishermen were immediately alert. The water was freezing. Their first impulse was to save the bears. But it wasn’t as simple as that. They had to make sure they weren’t in danger. The cubs had a mother, and mother bears are very caring. 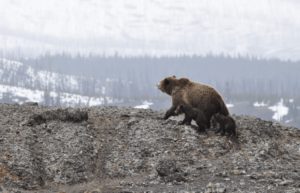 The two men searched for the mother in the water. When they continued to approach the cubs, they found nothing. The mother was nowhere to be seen. Had the cubs been abandoned? But then, out of the corner of his eye, one of the men noticed a large bear watching the cubs on the shore. It had to be their mother! 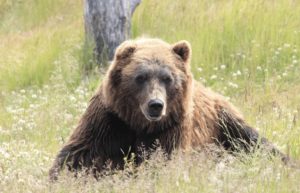 The fishermen were indecisive. They wanted to save the cubs, but they also knew it was risky. It was not clear whether the observing mother was encouraging the men, or whether she was ready to pounce if the men intervened? The men decided to do what they could to save the cubs, despite the risk. There was no time to waste! The water was too cold and the bears were too small to get out on their own. Then one of the cubs got really close to the boat to stick its determined paws over the side. It clung to the boat with its mouth and tried to pull itself up. He tried with all his might to save himself, but kept sliding backwards into the water. 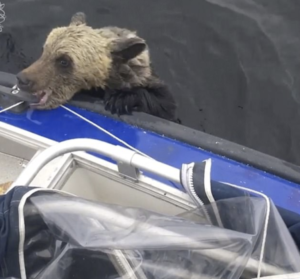 The two men knew they had to help him, but were afraid the cub would bite them if they grabbed him. They had to find a way to get the first cub back to the boat and then try to rescue the second one. Eventually, they had to reunite the cubs with their mother once they had landed. It was a big job. Would they succeed? 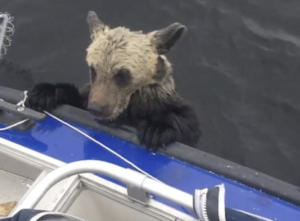 Eventually, the bear is brought on board with the help of the net and saved from drowning.

The second bear with a dark face is lifted out of the lake, too, and carried on netting on the boat, totally exhausted from the ordeal in the water. 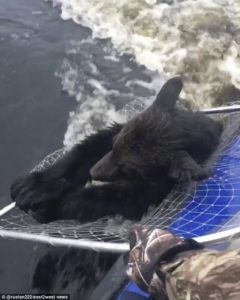 The men took them to one of 500-plus islands on the lake – where their mother had swum.The men took the bears into the trees hoping that their neglectful mother would find them and help them recover.