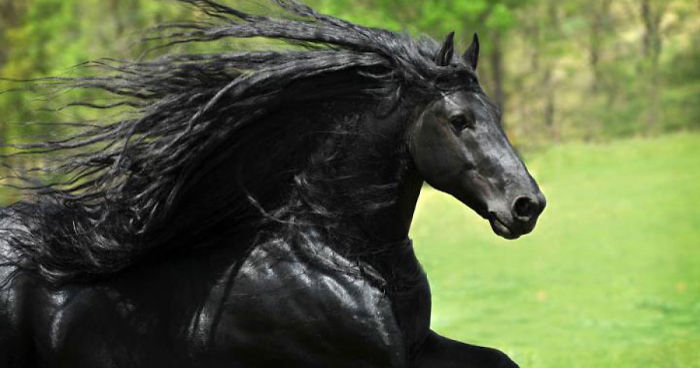 Frederick the Great is a 16-year-old Frisian stallion. The stallions were named after the king of Prussia of the XVIII century. The name is surprisingly suitable for a stallion. He is very majestic, beautiful, he has power and grace at the same time. In general, the horse looks like a king.

Friedrich was born in the Netherlands, the birthplace of the Frisian breed. At the age of 6, Stacy Nazario, the owner of Pinnacle Friesians, noticed him and moved him to Arkansas, USA. The new owner said that she immediately noticed something unusual about the horse. He seemed special to her and she was not mistaken.

Photos of Frederick the Great cause admiration and delight among the audience. A muscular body and shiny coat, a gorgeous thick mane and magnificent gaits cannot but fascinate. It is not surprising that in 2016 the British media called the stallion the most beautiful horse in the world.

The most interesting thing is that the horse knows perfectly well what impression he makes. According to the owner, he changes dramatically when he gets to competitions or exhibitions – the movements become more refined, the whole is selected and enlivened, like a real star in front of cameras.

Friedrich’s offspring are already growing up. It is known that in 2015, a magnificent stallion was born from him, who completely inherited all the beauty of his father. True, the baby still needs to grow up and gain strength and grace, but over time he will be able to argue with his dad for a place on Olympus.