The post office is quite often the object of various jokes, because funny and not so funny stories always happen there. The other day there was a curious incident in Sweden. Just think about it: the post office received a parcel in the name of a dog, which the local letter carriers refused to give without documents and signature of the animal, «moustache, paws and tail» was not enough. Rules are rules, and the owner and her dog had to try very hard to get it.

This is Chaya, a boxer dog who got into a funny situation at the post office 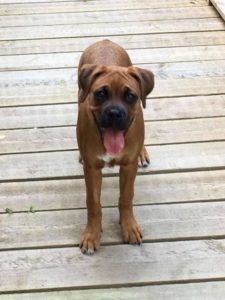 Marie Palmgren, Chaya’s owner, received a notice: She had to collect a parcel from a friend in another country with a toy for her dog from the post office.

Marie’s friend had sent the parcel to Chaya, not to Marie, because the contents were for the dog. 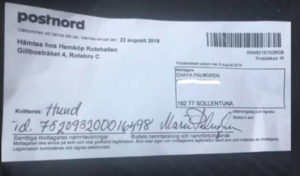 Oh, she shouldn’t have done that. When she arrived at the post office, Marie asked how she could fill out the paperwork to receive the package. The staff replied that the recipient’s signature and a document certifying his identity were required. The woman tried to explain that Chaya was not a person, but a dog, and that the sender had put her name on the package for fun, but the employees remained adamant. 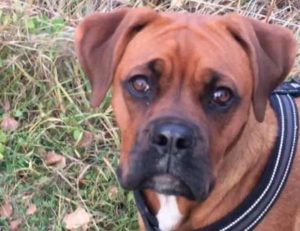 Fortunately, Marie had the dog’s papers. She went home, found them, took the dog, and went to the post office again. The woman showed the employees her papers, the dog’s papers, and the notice. The employees approved the paperwork, but said the dog’s signature was still missing and took out a stamp pad.

After the paperwork was in order, the signature was still required. Here’s how the dog did it:

And this is what a notice signed by a dog looks like. Genius! 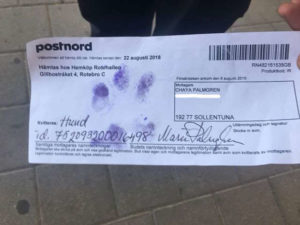 You’d think the postal employees were joking, but no. Marie says they were serious throughout the whole process. The woman, on the other hand, couldn’t contain her laughter as she got into the car.