A photo with a desperate, doomed mutt on a leash in the middle of a wasteland flood stirred up the world. People left the disaster zone in Houston in a hurry and could not always take care of their pets. But this particular dog pulled out his luckiest ticket. 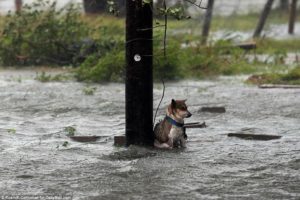 The photographer of the Daily Mail, Roarid Connellan, having completed the mandatory part of the work on photographing the flooded territories, suddenly noticed this unfortunate dog. He got through the flooded area and untied Lucky. That’s what he called the dog. And how the dog was called before and where its owners are, in this turmoil it is no longer possible to find out. The photographer shared food and water with her, but did not take it away. Still, this trailer village is her home, and the owners will return someday. 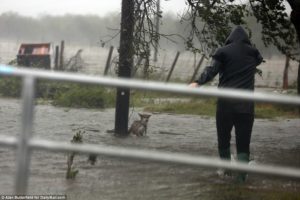 The photographer found out that Lucky’s neighborhood is inhabited by a black pit bull, a couple of cats and a pony. All animals are well-groomed, domestic. Now they are not in danger of death by drowning and they will find some kind of food for themselves. But they won’t last long, they need human care. Journalists can’t just take the poor animals with them. They had to contact the local animal control service. But the service staff did not explain anything clearly . 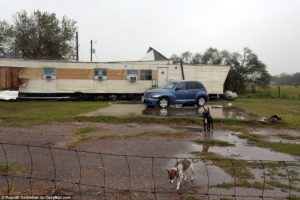 It remains to be hoped that the owners will return to Lucky in time. Although the photographer himself openly writes that he was disappointed in people who did not bother to spend 10 seconds to untie a couple of knots. In the comments, users write that such owners should be arrested and permanently banned from keeping animals — the elements are the elements, and it is absolutely impossible to throw a pet to certain death.

ANIMALS 0 47 views
People have different attitudes toward animals. For some, they are just another toy that

ANIMALS 0 44 views
Monica took her dog, Hazel, for a walk. But suddenly it rained heavily, and

POSITIVE 0 102 views
A music student decided to practice singing at home. She had only managed to

Delightful ‘diva’ cat who ‘upstaged’ opera singer
A music student decided to practice singing at home. She had only managed to
POSITIVE 0 102

A homeless kitten was caught in a heavy downpour and didn’t know where to go: the owner’s dog helped him out
Monica took her dog, Hazel, for a walk. But suddenly it rained heavily, and
ANIMALS 0 44

A girl became a social media star thanks to her striking resemblance to a Hollywood actor
Little Cora Grier is not even a year old yet. But she is already
POSITIVE 0 105

The unique triplets from Dublin are now 33 years old. What do they look like and what do they do?
In April 1987, a unique triplet was born in Dublin. The surprising thing was
LIFE STORIES 0 56