When the pit bull was brought to the shelter, she was shivering 24 hours a day. Her delicate skin, inflamed due to mange, gave off a putrid odor. Her swollen paws were filled with staph and her eyes were clogged with infectious mucus. Given her condition, it was likely that she would have to be euthanized.

At the shelter, the dying pit bull was never given a name. And most of his time was spent hiding in the depths of his lonely cage. One day a woman named Audra Spurio came to the shelter to get a companion dog for her two-year-old daughter Gigi. 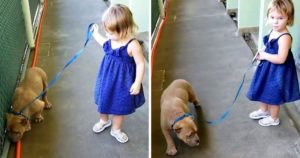 Pit Bull thought she was undetectable to the rest of humanity. But Gigi pointed at her and shouted:

Gigi tugged on Audra’s coat until she led her to the pitiful pit bull. Gigi was overwhelmed with compassion and stroked her gently. Even after Audra showed Gigi the other dogs, the little girl returned to the sick pit bull 3 times and finally pleaded:

“Let the dog out, she needs help!”

The shelter staff took her out of the kennel, washed her and let her play with Gigi in the yard. 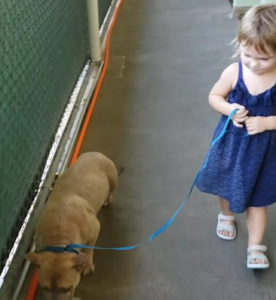 The pair instantly found a common language, and they played together for hours. The pit bull always held on to Gigi, and Gigi constantly reminded Audra that the “sick dog” needed help.

Audra sobbed and begged her mother to help the puppy, as the pit bull continued to shake violently every time she was separated from Gigi. Audra relented to Gigi’s earnest begs and brought home Scarlett, a pit bull she named after Scarlett O’Connor. The sick dog was finally able to go home! 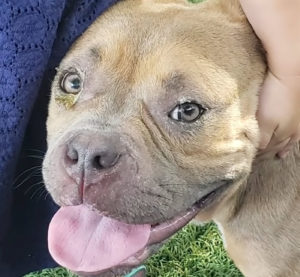 Within a week of finding her home, Scarlett’s health began to improve! She spent every spare minute with Gigi and never let her out of her sight. 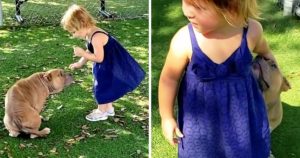 Scarlett recovered and eventually became Gigi’s faithful companion, thanks to Gigi’s selfless efforts to save her. Now this dynamic duo spend their days playing and having fun in the house and yard!