In social networks we were written about a cat that was stuck in a tree. The problem was that the animal was sitting on the level of the 5th floor, as it turned out, it had already spent four days on the branch. It was hot outside and the cat had had neither water nor food the entire time. The tenants tried to lure the cat with valerian and offered him food, but the cat was afraid to come down. The city services refused to help. 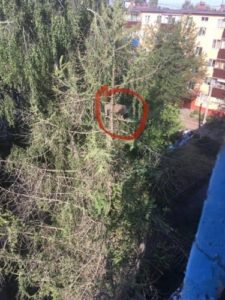 Unfortunately, the volunteers can’t fly, and we don’t have the special equipment to climb to such heights either. We really wanted to help, but we did not understand how.

We had no opportunity to shoot the kitten, we could only advise to hire a tower to help the cat. In response to our message we received only a barrage of criticism:

– One piece of advice, we thought you really wanted to help animals!

– And why did you start your own group? It’s useless anyway!

– The kitten will die in that tree and it will be on your conscience. 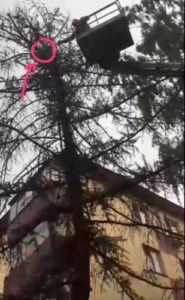 Only Victoria, who told us about the cat, reacted like a real person of action. She immediately started calling ads offering truck lifts for rent.

One of the crews came. The cat was removed. Out of fear, he barely made it to the ground and quickly ran away. 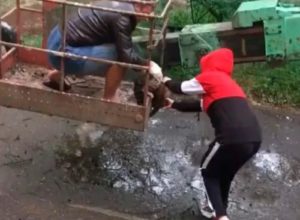 The crew that rescued the cat only charged half the amount agreed on the phone. We reimbursed all of Victoria’s expenses by asking for help from people who help our group financially.