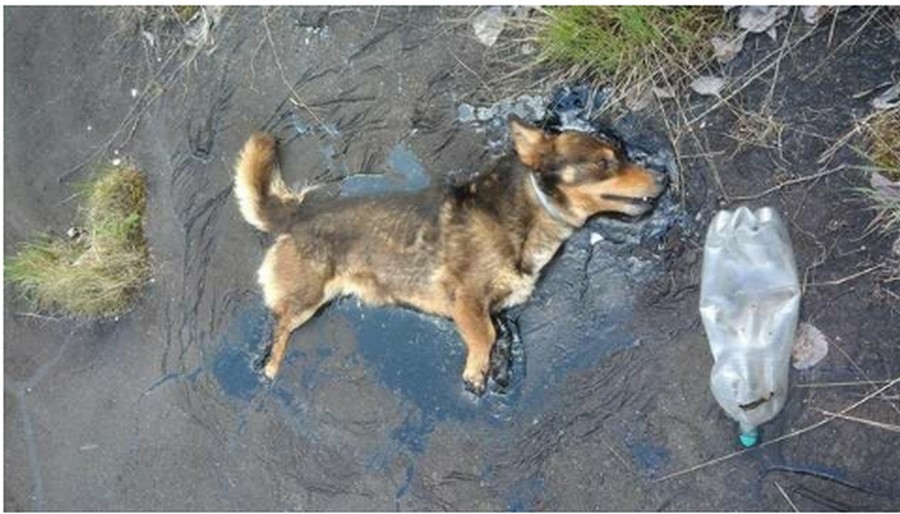 On the outskirts of the city of Suwalki (Poland), workers in the forest heard a dog barking. They didn’t pay attention to him right away. But then they realized that it was a cry for help. The workers went to the sound and found it there.

The dog got caught in a tar trap. He couldn’t move at all. The workers also failed to free the animal. They turned to the Animal Charity Animal Niczyje.

Joanna Godlevskaya, an employee of the Foundation, came to the rescue, who was moved to tears by the picture she saw.

It looks like the dog was looking for a warm place and came across resin. She didn’t realize that the warm resin would become a trap for her. The dog spent, according to experts, 3-5 days there, and all this time was calling for help. Fortunately, he was still heard.

The dog didn’t have long to live in a trap. But the appearance of rescuers caused a glimmer of hope in his eyes. People had to practically cut the dog out of the resin, and then with the help of vegetable oil to free the dog from the stuck pieces of resin. Then the animal was taken to a veterinary clinic.

There, for the next few hours, the dog was washed by various means. Fortunately, he was almost unharmed. There were only a few wounds on one side of the muzzle.He needed several more sessions of physiotherapy and cleansing.

The dog was named Farsik and a few days later he moved into his new home.Farsik was taken by the same employee of the Foundation – Joanna, who helped him escape from the trap.