A kind man noticed that his neighbor was keeping her dog in the yard on a chain, without food, water and medical care. The man realized that this dog needed help. So he contacted a local animal rescue.

The rescue team agreed to help and followed to the woman’s house where the dog was located. When they saw the dog, it was worse than they thought. The poor puppy was tied to a tree, next to an empty dirty pan. 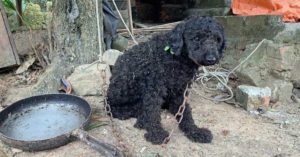 The chain was so short that the dog could only walk one meter. The dog’s fur was very dirty and tangled and had a unpleasant odor because his owner had never bathed or cared for him.

The dog was very friendly and seemed happy because people were finally paying attention to him. It was probably the first time in his life. 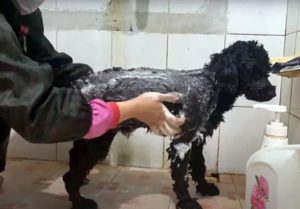 They immediately gave the hungry dog some food and water and talked to the owner about the possibility of taking the dog away. Fortunately, the owner agreed. 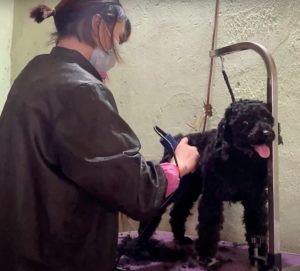 The first thing the rescuers did when they took him to the shelter was to give him a much needed a bath to get rid of that awful smell. The bathtub not only got rid of the dirt, but it was also a way to get rid of his horrible past.
Now he is clean and healthy and ready for a new home forever.