Chelsea saw the picture of the dog on the Internet just in time. After all, the dog was going to be put to sleep in just two days. She was emaciated and had a bunch of illnesses. That’s why the shelter staff didn’t think the animal would survive and someone would want to take it in.

But when the girl saw the picture of poor Clementine, she knew immediately that she had to save her and make her happy. Chelsea applied for «adoption.

«One of the shelter employees was so shocked that we were interested in this dog that she even cried. She told us that they had received many applications in recent weeks, but none for Clementine,» Chelsea shared.

The shelter worker also warned the possible owner that Clementine is distrustful and fearful of people. Therefore, making contact with her would be very difficult. However, Chelsea was not intimidated by any difficulties. She really wanted to help the dog. When she saw Clementine for the first time, she immediately realized that she had never known love and care. 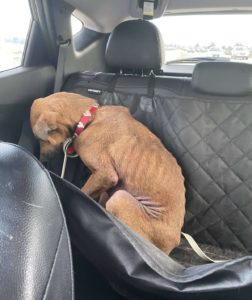 «The pet was afraid of all people and tried not to look at anyone. When Clementine came to our house, she was constantly shivering, hiding behind furniture, and for many months sat with her face turned away from the wall. There was a hollowness in her gaze. She never looked at our faces. And every time we came near her, she’d bow her head,» said the Clementine’s owner.

Clementine only trusted the other dogs in the family. She spent a lot of time with them, playing and running around the yard. It was then that Chelsea saw that a pet could be happy. 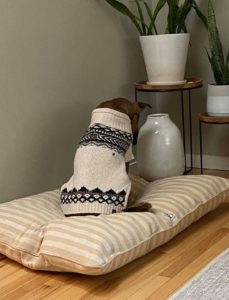 Clementine was taken regularly to the vet and treated for several months for illnesses. This gave results. The dog stopped shaking and felt much better. Once she even looked her owners in the eye. And after seven months, she was already looking at her two-legged parents with affection, love and trust.

«Now Clementine looks us in the eyes all the time when we pet her. She also listens to us very carefully when we tell her something. But she is still wary of strangers and sometimes even scares us if we move too fast and come up behind her. But she’s already changed a lot, compared to how she used to be,» says Chelsea. 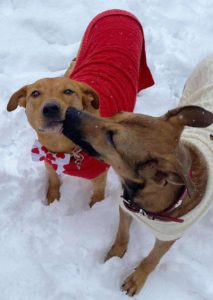 Now the dog has transformed not only externally, but also internally. She has become curious and playful, like a puppy. But the most important thing is that Clementine feels safe. She fully trusts her owners and loves them. She really likes to lie near her feet and put her tummy up to be stroked. 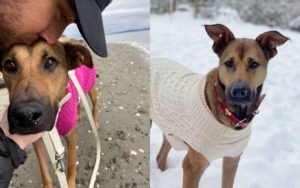 «Clementine turned out to be a very affectionate and sweet dog. She just wanted to be loved, and she loved back. She is very loyal to us, ready to protect us from everything in the world and follows us everywhere,» says Clementine’s owner.

ANIMALS 0 12 views
A resident of the English town of Gloucester found this baby on the street.

ANIMALS 0 42 views
All shelter dogs want to be taken home. Unfortunately, for some, it is a

ANIMALS 0 46 views
On a Monday morning last November, Björn Wall of Sweden was washing his ATV

Passersby walked by a lame dog, but a woman decided to help him
A resident of the English town of Gloucester found this baby on the street.
ANIMALS 0 12

Where the tallest people on the planet live
Tallness has long been considered an attractive trait for men and often for women.
LIFE STORIES 0 34

A sad, elderly shelter dog is adopted moments before being euthanized
All shelter dogs want to be taken home. Unfortunately, for some, it is a
ANIMALS 0 42

At 37, Cristiano Ronaldo still lives with his mother to care for her — She worked 7 days a week to buy him his first shoes
Did you know that the soccer world was almost deprived of the talent of
LIFE STORIES 0 16