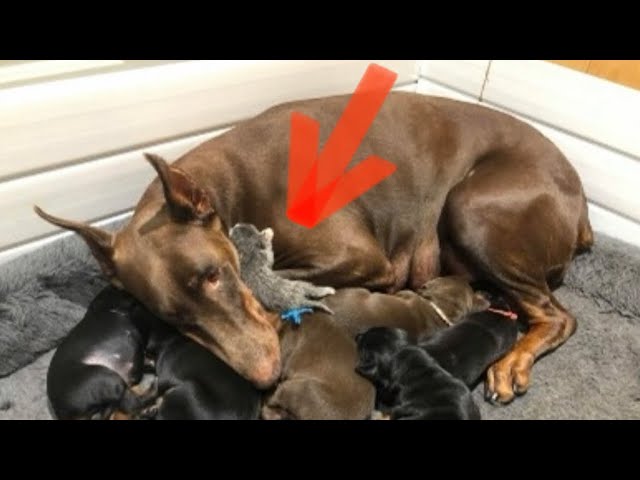 A resident of New York State shared on the web a wonderful story of saving a newborn kitten. The foster mother for the baby was her foaled dog of the Doberman breed.

Suddenly, a faint squeak from the garden caught her attention. The woman followed the sound and found a tiny blind kitten. Apparently, he was only recently born. She did not touch the baby, rightly deciding that the mother cat had gone about her business and would certainly return to the crumb.

But the baby’s squeak was heard throughout the day. And in the evening, Brittany decided to visit the kitten again. The baby was still the same, alone and only crying quietly from hunger. The woman could not leave him on the street and took him into the house with her. 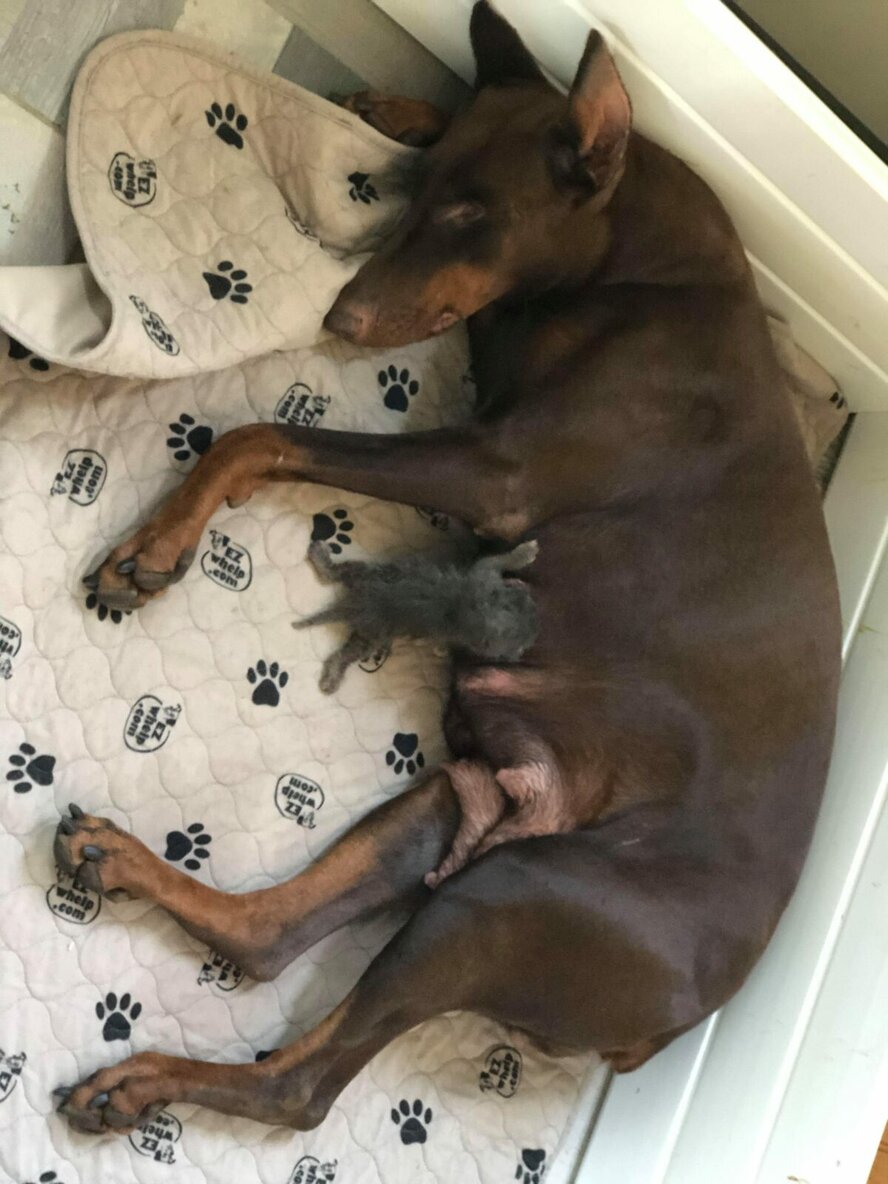 Her dog, Ruby, had just brought her third litter and was now nursing puppies only slightly older than the foundling. Brittany was a little afraid of the pet’s reaction. But the Doberman did not show aggression to the baby. Ruby, at first just watched the kitty, and then sniffed and began to lick.

The fact that the dog accepted the foundling, the owner realized after her dog turned around to give him the opportunity to eat. Ruby’s own puppies also didn’t make a difference between siblings and a newborn kitty. The dog has already taken care of orphaned babies of other species – rabbits and guinea pigs a couple of times. So now there was no need to worry about the fate of baby Rose. Mrs. Callan shared with her Facebook followers touching photos of the first acquaintance of Ruby and her adopted “daughter”, telling in the comments that the baby rarely manages to feed dog milk, so she often has to give her nutritional mixtures. At the same time, Ruby is always ready to give her attention and maternal affection. The kitten falls asleep in a close circle of puppies under the supervision of the mother. A few weeks later, the stronger kids were already chasing each other with might and main. Compared to the large, more than two kilograms, puppies, Rose was petite and fragile. But the caring Ruby was always on the alert. She deftly snatched the “youngest” from under the played boots so that she would not be trampled. An adult kitten feels great in a Doberman family.
A couple of weeks later, Rose will be picked up by a relative of Brittany. A woman, watching a formidable pet, worries that the dog will miss her adopted daughter, whom she still treats with tenderness and care.

Brittany shared this story to show users that a formidable, fearless guard can be a friend, loving, gentle and caring.

The guy photoshops cartoon characters in his photos so that it seems they will soon appear in real life
An elementary school teacher, who is also an artist and an actor, creates very
POSITIVE 0 6