The kayaker noticed a strange ripple on the water. It was getting closer and the man decided to look under the boat with a camera in hand. The video captured the moment when the kayaker sees a huge white shark at least 6 meters long right below him. 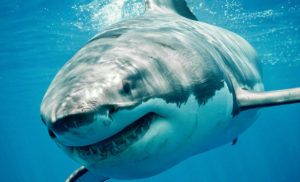 Ilan Toussieh often kayaks to the shores of Northern California. The waters here are relatively calm, allowing you to get out far without fear of big waves.

But the sea was dark that day, almost pre-thunderstormy. That’s why Elon began to scrutinize the ripples. Meeting a storm in a kayak was not a good idea. After a few seconds the man realized that it was not the excitement of the ocean: something was approaching him. 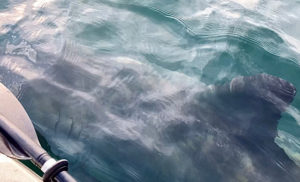 When he lowered the camera under the water, the man immediately saw the shark. It was very close:

The shark continues to circle the kayak.

“When I spotted the shark, I was initially shocked. The sun had just come out, so the water was still a very dark blue. I was looking at the water when all of a sudden, what looked like a huge grey submarine came under the kayak. I saw its face and eyes, and seeing its white underside, instantly recognized it as a Great White Shark.”

Toussieh does not know how large the shark was, but he said it was the size of his kayak. He said he felt intimidated by the shark’s size but it seemed calm. “I realized there was not much I could do about it and just relaxed and enjoyed the ride. This turned out to be one of the most spectacular experiences of my life,” he said.

“The shark circled me for over two full minutes, but I suspect it hung around out of my sight a bit longer. I have seen some big great whites out there, but never so close to me, so it was much more difficult to estimate their size. This was certainly the largest one I’ve had so close to my kayak. I could’ve literally reached out and touched it, had I wanted to.”