This story is sad.It is about the fate of a husky breed dog that fought a cobra while protecting its owner’s family in Taiping.

The incident occurred at 11:00 a.m. on March 20, when a 4-meter-long cobra circled around the Yap family home and then entered.

Immediately, a Siberian Husky dog named Dai Bao noticed the snake and then attacked it.

As a result of the struggle between them, Dai Bao managed to immobilize the snake. But unfortunately he was wounded by the snake’s bite. 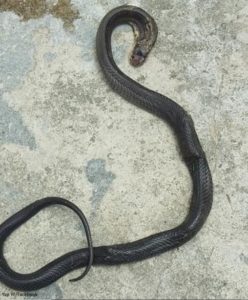 “At the time, only my mother and son were at home. My son heard Dai Bao barking and immediately went out to see what was going on.”

According to Mr. Yap, his son was shocked when he saw their dog bite the snake and shake its body.

Dai Bao then released the snake, causing the cobra to fall to the floor. The dog also seemed to bark in pain.

At this time, Dai Bao’s nose was bleeding. And his eyes were swollen. According to Mr. Yap, his dog was clearly bitten by a snake. 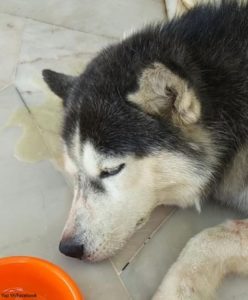 Then Mr. Yap’s mother rushed to ask for help from relatives who lived nearby. And together they managed to kill the snake.

“After receiving a call from the mother, I rushed home to take Dai Bao to the veterinary clinic.”

However, doctors advised the family to be mentally prepared because there is no “antidote” for animals in Malaysia. 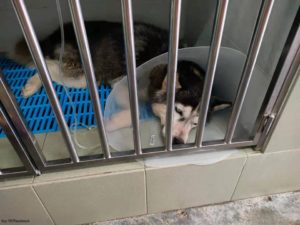 The dog himself had to be strong and keep fighting to survive. Despite injections and saline drips, Dai Bao eventually died.

Recalling memories related to the dog, Mr. Yap recounted that Dai Bao was taken by him off the street on July 19, 2019, to be adopted.

“You lived with us for less than two years, and now you’ve left us forever,” Mr. Yap said. 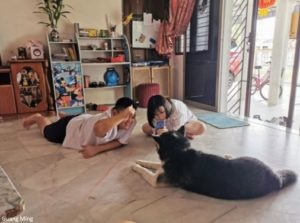 “My friend said that Dai Bao wanted to return the favor for us for accepting him and making him a member of the family. But we didn’t expect anything in return. We just wanted Dai Bao to be with us when we grew old,” Yap added.

Dai Bao’s body was buried under a large tree near Yap’s house, where Dai Bao loved to play.