In a new study published in the Royal Society Open Science, scientists found that different whales made the same sounds (or “songs”) when they were 14,000 kilometers apart in the ocean. In fact, whale songs are always evolving. A whale may pick up a song of a congener, add something of its own, or embellish it – and other members of the group pick it up and pass it on. Songs can also be “borrowed” from neighboring populations of whales. Surprisingly, humpback whales on the east coast of Australia sing the same songs as whales in French Polynesia and Ecuadorian waters. Previously, scientists thought that one song could travel only 8,000 kilometers, but 14,000 kilometers is a new record! At the same time, the same whale sounds can be combined in different ways in different places. Individual sounds can be repeated several times, almost like a refrain – and there can be several of them in each whale song. So how do whales pass songs to each other? According to scientists, it happens mostly when whales move to different areas to breed and search for food. This is how songs are passed from one place in the ocean to another. A song may appear in one group, and when the group moves to another place to give birth to offspring or search for food, the whales pass on the song to the inhabitants of that place. Neighboring humpback whale populations pick it up and then pass it on to another group. 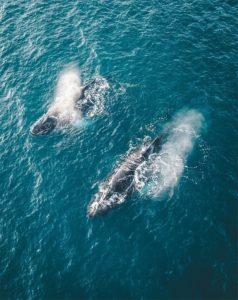 Scientists are still investigating the phenomenon of whale songs, and trying to unravel them. In the meantime, we can listen to these amazing sounds!